WATCH: Video emerges of Drake kissing and groping a 17-year-old girl during concert

Drake, one of the biggest artists in the world, is being criticised for his behaviour towards a 17-year-old during a concert in 2010.

People have taken to social media to complain what the Canadian rapper did while he was on stage.

Have a look at the clip here:

Speaking to the girl from the crowd who he pulled on stage, he says: "Y'all gon' have me get carried away. I get in trouble for shit like this. How old are you?" 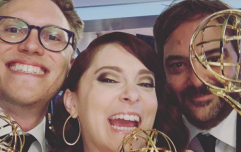 END_OF_DOCUMENT_TOKEN_TO_BE_REPLACED

After learning she is only 17, the rapper seems thrown off, saying: “I can’t go to jail yet, man.

"Why do you look like that? You thick. Look at all this. Well, listen 17, I had fun. I don’t know whether I should feel guilty or not, but I had fun. I like the way your breasts feel against my chest. I just want to thank you."

Drake has not responded to any of the criticisms as of yet.