But you're going to have to be really quick to get to see Drake in the 3Arena.

Drake caught millions of fans by surprise last week when he announced a European tour, as well as three nights in Dublin's 3Arena.

Standing tickets for all three nights sold out quickly, while a number of seating tickets are still available for two of the nights. 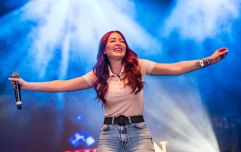 END_OF_DOCUMENT_TOKEN_TO_BE_REPLACED

But disappointed fans need not despair just yet, as it has just been announced that a limited number of tickets will go on sale again on Wednesday morning at 9am.

Tickets will be available here, but like we say, you're going to have to be really quick, so have your phones at the ready at 9am...

MCD Productions announced the news on their Twitter page on Tuesday evening.

Drake is taking his "Assasination Vacation Tour" to the 3Arena on 19, 21, 22 of March of 2019, alongside Canadian rapper Tory Lanez.

popular
Facebook looks set to change its name as part of rebrand
Largest aircraft in the world touches down at Shannon Airport
How to lower your cholesterol - 5 really handy tips
An underrated Denzel Washington thriller is among the movies on TV tonight
Skeletal remains of six people found under Cork pub
The 100 greatest TV shows of the 21st century have been revealed
Claire Byrne was having absolutely none of Nigel Farage's claims on Monday night
You may also like
3 weeks ago
Kings of Leon announce first Irish shows in five years
1 month ago
Fatboy Slim announces two major Irish shows for 2022
1 month ago
90s legends Vengaboys, Atomic Kitten and 2 Unlimited to play huge show in Dublin next month
4 months ago
Billie Eilish announces two concerts in Dublin next year
1 year ago
Niall Horan announces Dublin show
1 year ago
Slipknot’s Jim Root: "I've given my entire life to this band"
Next Page