Your EP day two report, in which nobody knows where they actually are and The Strokes are brand new again...

With Friday at Electric Picnic done and dusted - get our full report right here - it is time for us to rediscover our youth. Wild Youth, that is.

Look, that's the kind of pun you're getting on day two, okay? As for the Wild Youth boys, it really has been quite the run for them in recent times. From opening for Westlife at Croke Park to soundtracking an Eir ad, it seems the only way is up.

END_OF_DOCUMENT_TOKEN_TO_BE_REPLACED

As such, a sunny afternoon slot on the Main Stage of EP feels about right, right about now. It's what you expect; bright and breezy pop numbers, widescreen charisma from green-haired frontman David Whelan, and the encouragement of an 'Ole, Ole' chant for good measure. The crowd, always moving, eat it up.

It's a big day for Inhaler, meanwhile. Last year, they left a good impression in the Other Voices church. This time, it's a Rankin's Wood bow and plenty of proud parents watching in the wings.

In truth, it's going to be tricky for Eli Hewson to shake off birthright associations but his band deserve the chance to carve out their own identity. In conversation with JOE a couple of hours before stage time, the frontman underlined how vitally important the pursuit of music is to him.

He's surrounded by friends who clearly feel much the same. Based on Saturday's evidence it's early days for sure, but a certain rawness suits them. There may be something here.

END_OF_DOCUMENT_TOKEN_TO_BE_REPLACED

From young-blood hopefuls to the soon departing Otherkin and their Stradbally goodbye. Calling it a day after seven years, the rowdy Dublin outfit have largely been left out of the conversation when it comes to the supposed resurgence of worthy Irish guitar music.

Picnic gives them a good chance to, as they put it in their farewell communiqué, kick against the pricks. Alas, it's just a standard rock and roll show, oddly lacking in spirit, played out before a fairly empty Electric Arena. Sunrise, sunset.

Maybe it's the clash of Inhaler nearby and Years & Years drawing a healthy Main Stage turnout for Olly Alexander's brand of bombastic pop. Day two pretty much belongs to this technicolour realm, but let's take a quick woodland detour before we double down on that.

Atop the good ship Salty Dog, Nealo holds court. A rising MC as the Irish hip hop scene rages forth, his power is twofold; ragged endearing charm and the embracing of communion. His set is laid back and knowingly aloof, affording the opportunity for NUXSENSE member Jehnova to just about steal the show as one of several guests.

END_OF_DOCUMENT_TOKEN_TO_BE_REPLACED

Back to all things that glitter. Charli XCX hits up the Electric Arena, which fills up quick, ready for a tight, thrilling 42-minute set. She flunks the geography test early and often, enthusiastically shouting out Dublin so thoroughly that it's impossible not to wince a little harder with each new utterance.

By the end, she's beckoning us all to hurl our phones upright on "the last night of the festival," which feels improbable on a Saturday in any part of the world. Such flubs cannot overshadow a showcase of supreme confidence, bolstered by a selection of mostly stellar gloss-coated numbers.

The appearance of Héloïse Adelaïde Letissier, precisely 30 minutes before she's due on the Main Stage in Christine and the Queens mode, is a brilliant, unexpected flex, and both stars play off one another beautifully on 'Gone' amidst a warmly inclusive atmosphere.

That half an hour later, Letissier fares okay, though she's just as convinced that Laois is the capital of the country. This transgression doesn't matter, and yet it does. On Friday, Billie Eilish was similarly guilty. It happens at every Irish festival, despite phones defaulting to specific locales.

"She reminds me a little bit of Freddie Mercury, without the vocal range," notes a voice in the media tent as Letissier sails through 'Tilted' and lesser lights. Harsh and yet somewhat fair.

Darkness falls and The 1975 make everyone wait a little. Fair enough, for the gigantic neon pop extravaganza that steamrolls in is precisely what a top tier act should provide, even when a legendary rock band is waiting to follow.

We'll get to them.

Matty Healy and his charges have been unabashedly honest about their intentions. Tonight, they reiterate as every colour your mind can conjure up bursts through the screens.

"We are the greatest rock band in the world, and we're not even a rock band," Healy muses a handful of songs in, hand loosely hanging on hip. He ponders on the apparently difficult duality of being a rock star whilst simultaneously sporting tight jeans, fabulous boots, and being a naturally awkward Englishman.

"Doing this comes with a certain amount of ego conflict," he adds. "I don't know how I feel about that. Anyway, this is all leading up to a song..."

Cue 'Love Me', a Peter Gabriel-inflected banger that meant one thing once and a different thing now. "You see what I mean?" Healy announces afterwards. 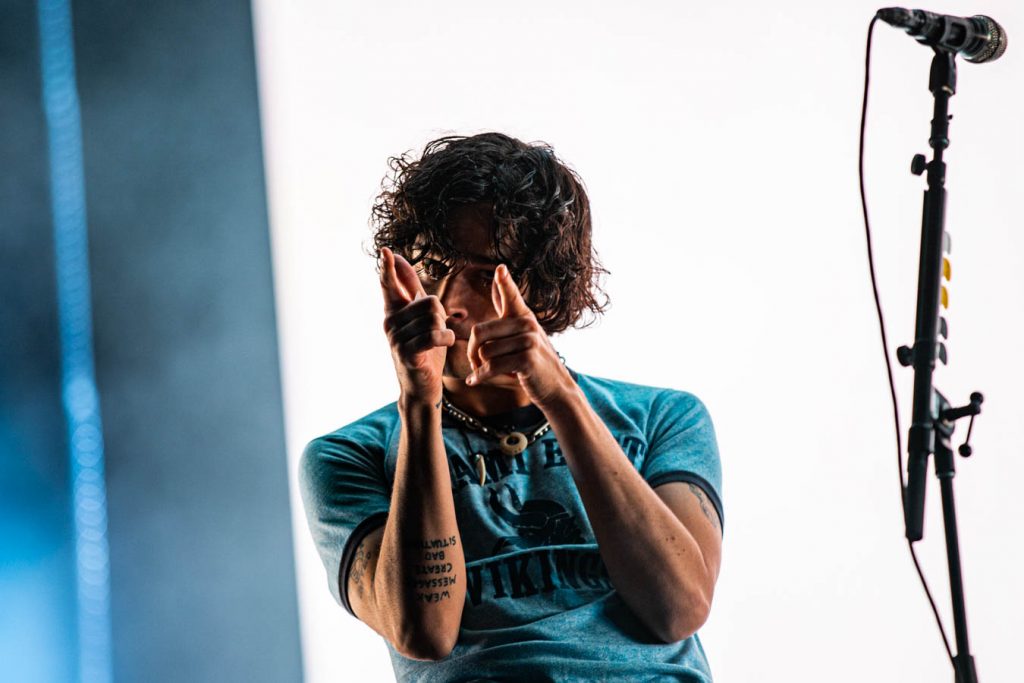 He gets away with the bravado because that's what The 1975 is powered by.

They're supposed to be puckish, maybe even prickish, and pop music needs them right now. And maybe there's more to it. An effigy of activist Greta Thunberg gets a lot of screen time during the fantastic 'I Always Wanna Die (Sometimes)', advertising an upcoming climate emergency strike.

Minutes later, a five-minute treatise plays out, Thunberg's voice and words warning us all of impending doom. A restless audience doesn't want to know. They talk over it. Some mock it. Healy stands with his back turned, smoking a cigarette for the duration. A Pavlovian cheer goes up at the end. C'est la vie.

Something something profound. We're all gonna die. Ain't it cool?

The Strokes, sauntering onto the same terrain as the clock strikes midnight, have both nothing and everything to prove, and though Julian Casablancas is on record about caring for the environment, his apathy and arrogance tonight are, frankly, hilarious.

"Check out these fuckin' IMAX screens," he spits following an opening run of tracks best described as, 'Oh, yeah, these are all fucking great, remember?', all delivered like the clock has been struck back to the turn of the century.

A signature homegrown chant starts up.

"I don't speak festival," Casablancas mutters. "What does this mean?"

'Ole, Ole' is explained away by guitarist Nick Valensi as, 'Fuck yeah', but that's hardly enough. And so The Strokes beckon the bullshit and incorporate it into an impromptu jam. Somewhere in between, Casablancas attempts gaelic prose and performance. 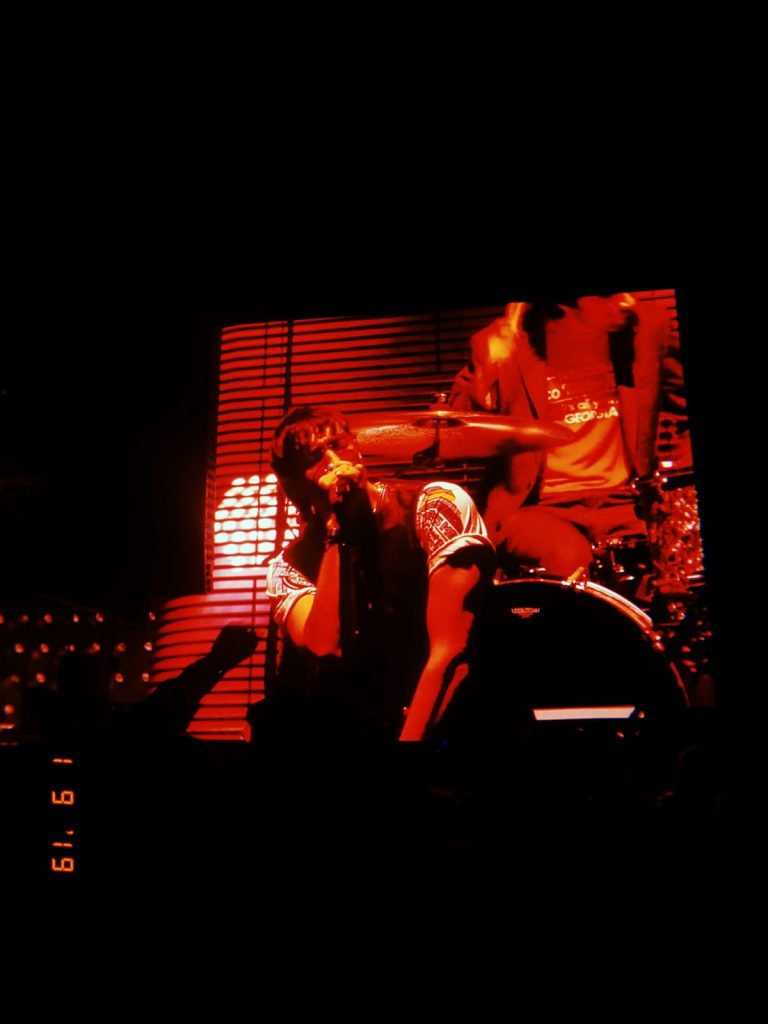 He's armed with exceptional sarcasm, openly informing us how little he gives a shit about this headline commitment. Vague first date questions for us. A wonderfully dickhead laugh just in case you missed the punchline. Mocking reference to The 1975. I just flew in. I do not care.

But it's all good. It's all amazing. The songs are too bulletproof. The performance is next level. This is the rock and roll band the world has sorely missed.

Every element works. Everything sounds immaculate. Christ, imagine having this back catalogue at your disposal. Imagine not giving a fuck and yet being this incredible.

Quick question - is 'Hard To Explain' the best song of all time?

Because it is tonight.