Fatboy Slim is coming to Dublin in March

Check it out now.

Ireland has a fairly great relationship with Fatboy Slim.

More specifically, he has a really strong relationship with Bohemians Football Club.

In 2015, Bohs fans unveiled a banner inspired by the DJ's biggest song 'Praise You'.

Slim liked the gesture so much that not only did he request a copy of the banner on Twitter, but he used it in the background of one of his gigs that year.

@Inphosports I'd love a print / hi rez of that pic, pls could you email info to info@FatboySlim.net ?

So we imagine that a lot of Bohs fans will be chuffed to hear that the DJ is coming to Dublin in March 2019.

Fatboy Slim, whose real name is Norman Cook, will take his In The Round show to the 3Arena to the delight of his many Irish supporters.

He is aiming to turn every arena he performs in into "unique club night experience", to the point that the concert is already being described as "something unusual and completely different." 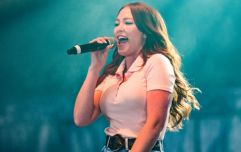 END_OF_DOCUMENT_TOKEN_TO_BE_REPLACED

Fans can expect a big production which includes a revolving stage, so that no seat in the house is too far from the action.

Tickets go on sale on Friday 14 September on Ticketmaster.ie, and we imagine that they're going to sell out fairly quickly, so make sure you're on your toes.

The Big Reviewski || JOE · The Big Reviewski with Y: The Last Man, that Malignant ending & a secret streaming service
popular
Larry Bass resigns from RTÉ board just one day after first board meeting
Cork City Centre described as a "no go area" after man pulled from wheelchair in violent attack
Aer Lingus announces flight sale as US to lift travel ban for vaccinated EU passengers
Nearly 100 domestic abuse incidents reported to Gardaí every day this year
The first ever foldable hotel room has been launched in Ireland
The weather for the week ahead looks very autumnal indeed
WATCH: Margaret Thatcher was briefly resurrected at the Emmy Awards
You may also like
3 months ago
Billie Eilish announces two concerts in Dublin next year
1 year ago
Niall Horan announces Dublin show
1 year ago
Slipknot’s Jim Root: "I've given my entire life to this band"
1 year ago
"It’s not a very rock star life, to be honest!" - Sigrid in conversation
1 year ago
Live concert of David Attenborough's Our Planet series coming to Dublin
1 year ago
The Script announce third and final Dublin show
Next Page