Niall Horan is heading over to America at the end of October and he is taking one of his "favourite artists" overseas with him.

The former One Direction member released the news on Twitter shortly before 2pm that he would be bringing Gavin James with him on tour in the US, and James will also join Horan in Toronto too.

You all know that one of my favourite artists is @gavinjames.so I'm delighted that Gav has agreed to come to the USA with me . 🇺🇸

Gav will also do the show in Toronto with me . So canada you'll have the pleasure of hearing them sweet tones

Horan wasn't the only one that was delighted to announce the news as James was quick to get in touch with the Slow Hands guitarist to share his delight. 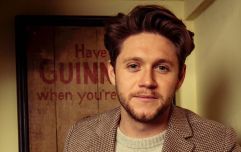 END_OF_DOCUMENT_TOKEN_TO_BE_REPLACED

The former One Direction star will set off on a mini world tour at the end of August and admitted to his fans that he wanted to make the show as Irish as possible.

Taking to Twitter, Horan said: "So for my shows I wanted to make it as Irish as possible and show off the incredible music coming out of our lovely little country.

"So I asked around to see who was available and we got some great replies, so happy with this."

popular
The "eighth best movie ever made" is among the movies on TV tonight
Mia Khalifa claims seaside town is better than Miami
Jennifer Lawrence sparks controversy by saying she was the first woman to lead an action movie
Met Éireann updates weather warning for entire country as temperatures set to fall to -6
The 50 most iconic songs of all time* have been revealed
The start of the superhero takeover of Hollywood is among the movies on TV tonight
One of the best films of all time is among the movies on TV tonight
You may also like
1 month ago
The end of a horror icon & 6 more new movies and shows to watch this weekend
1 month ago
EXCLUSIVE: Niall Horan and Lewis Capaldi on their new show Homecoming
9 months ago
Late Late Show fans in bits as Leona Maguire roasts Niall Horan's golfing skills
2 years ago
Dustin The Turkey issues response to Niall Horan fans
2 years ago
Niall Horan "stans" target Dustin the Turkey and Ray D'Arcy online
2 years ago
Niall Horan donates €100k to ALONE charity
Next Page