The most iconic of music festivals, Glastonbury is running a competition for new bands.

We're already assembling our band here in JOE, despite no real discerning musical talent, but who wouldn't want to win the prize on offer from Glastonbury?

They are giving new acts based in the UK and Ireland the chance to compete for a slot on one of the main stages at this year’s festival. 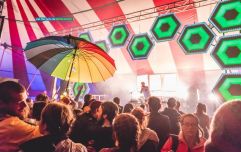 END_OF_DOCUMENT_TOKEN_TO_BE_REPLACED

The competition runs for one week only and the winner will be given a slot on one of the main stages plus £5,000 PRS for Music Foundation Talent Development prize, to help take their songwriting and performing to the next level.

You can be from any musical genre which is handy because our newly former in-house band here is pretty sure white noise and lack of rhythm is a genre.

To enter the competition and be in with a chance of this unreal prize, just click here.

Here's just one of our favourite performances from Glastonbury 2014.