A look inside Ireland's most exciting and welcoming subculture: Irish battle rap

Irish battle rap is thriving - here's everything you should know about it.

There is a never-ending gap in the market when it comes to rap music in Ireland. The fans are there, and they always have been. This is evident whenever Longitude rolls around every summer, and what is essentially a rap festival in South Dublin sells around 40,000 tickets.

And there is an argument to be made that we are currently living in the golden era of Irish rap music. Kojaque, Versatile, Rejjie Snow and Mango x Mathman are just a few Irish rap acts who are killing it at the minute.

END_OF_DOCUMENT_TOKEN_TO_BE_REPLACED

But top talent aside, there is something even more intriguing happening at the very core of the Irish rap scene - rap battles.

That's right, just like in 8-Mile! Except, not really. 8-Mile and other famous pieces of pop culture would have you believe that a rap battle is a tense, nasty environment where you'll end up getting punched in the face for looking at someone funny.

And maybe in some parts of the world this is true, but not at Rap is Full.

This is Ireland's main rap battle league, who put on regular events, throughout the country. I attended the most recent event which went down in Bad Bob's in Temple Bar, and I genuinely can't remember the last time I had a night out that was as enjoyable.

The format might be somewhat different to what you expect. There's no beat playing in the background, and the stuff that the rappers are saying isn't coming to them off the top of their heads. They know their opponents weeks in advance, and prepare three rounds of material specifically catered to the person they are against.

A number of rappers were flown over from the UK to compete against Irish rappers from across the country, with rappers from South Dublin, Kildare, Wexford and Galway all putting on a show to a crowd of well over 100 people.

I walked into a room full of people I had never met, and was greeted as though it was a family gathering.

END_OF_DOCUMENT_TOKEN_TO_BE_REPLACED

In a scene that seemed like one big clique, it also felt like the only requirement was to actually show up.

I can't remember the last time I heard so many different accents in the one place. This was part of the reason I found it so enjoyable - there was such a wide range of people, and each and every one of them seemed happy to be there.

Regular battler Podge Dwyer reckons that this is part of the reason why the scene is thriving so much.

He said: "Battle Rap in Ireland is different to other cultures because of it's welcoming and diverse nature. Although, a cut-throat artform, atmospheres are always friendly and all differences get left on stage and everyone can share a drink afterwards.

"We are proud to have had performers that are black, that are female, that are from the travelling community, from Dub to Culchie and many other demographics."

Among the people that battled was a student from Trinity College in Dublin, an 18-year-old from Galway, a 60-something year-old lady named Joy France, and loads of other interesting characters that you wouldn't meet anywhere else. 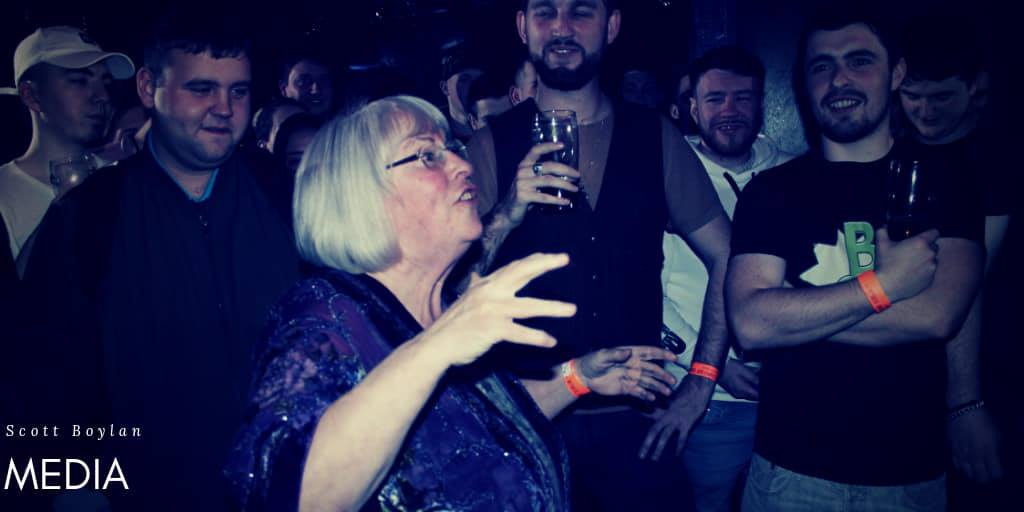 END_OF_DOCUMENT_TOKEN_TO_BE_REPLACED

And much as it is an enjoyable night out, it can't be ignored that the artists that are being watched are all extremely talented too. The levels of writing, the performances, and the way they control a crowd is spectacular. There are some people here who could go really far, and this might be your best chance to see them in such an intimate environment.

At an event during the summer of 2018, two of the most respected battle rappers in the world were flown to Dublin to perform to a crowd of Irish fans, and it definitely lived up to expectations.

The Saurus and O'Shea have hundreds of battles between them, and have performed all over the world for over a decade now. Seeing them face-off was something that fans eagerly awaited for years, and Dublin was the venue chosen for it to go down.

Have a look here:

Clip via Rap Is Full

Their next event is taking place on 11 May in Dublin, and they have already announced that two established rappers, from California and Glasgow respectively, will be taking part.

Tickets for Last Words 3 can be found here, and we can't stress enough how if you have any interest in rap music, poetry, writing, or just a good day out, you should attend this event.

The Big Reviewski || JOE · TBR Spotlight: Loki - Episode Two - 'The Variant'
popular
Garda union hits out at "absolute confusion" over outdoor drinking and dining
The Queen appealing for volunteers to weed the garden of her Sandringham Estate
Gardaí will use "discretion" over outdoor drinking at pubs and restaurants
The Lisdoonvarna matchmaking festival has been cancelled for a second year
The JOE Movie Quiz: Week 107
QUIZ: Can you name all these European countries from a list of cities?
The JOE Friday Pub Quiz: Week 248
You may also like
5 days ago
Government to allocate €25 million in funding to Electric Picnic and other live events
1 week ago
The JOE Music Quiz: Week 61
1 week ago
Picture This announce details of their only Irish concert dates for 2021
1 week ago
Noel Gallagher calls Prince Harry a "f*****g woke snowflake" in brutal interview
1 week ago
Sinead O'Connor performs u-turn on plans to retire from music
2 weeks ago
JOE’s Song Of The Day #899 – Emily 7 'Somebody'
Next Page