Irish rap duo Versatile are performing in the Olympia this October

Seeing Versatile live is something we should all experience.

Irish rap is in a strong place at the moment.

There are loads of class artists coming through producing great music on a regular basis.

Perhaps the most well-known of these acts is the Dublin rap duo Versatile.

Last week they released a brand new song entitled 'Perfume' which shot to the top of Youtube's trending list in Ireland, and is already sitting pretty on over 300,000 views.

A few weeks before that they blew the metaphorical roof off of Marlay Park at Longitude, with many attendees claiming they were the best act of the weekend.

If you were unlucky enough not to see them, don't worry, you've got a second chance. 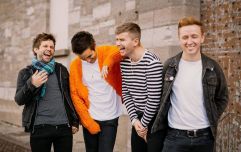 END_OF_DOCUMENT_TOKEN_TO_BE_REPLACED

The pair will be performing in the Olympia Theatre on 28 October, in what might be their biggest headline gig to date.

In a few years time we reckon a lot of people will be saying 'Versatile? Yeah we were at one of their first headline gigs...'. Make sure you're one of those people.

popular
One of the best action movies of recent years is finally available to watch at home
The JOE Friday Pub Quiz: Week 278
Gardaí launch investigation after man's body reportedly brought into post office in Carlow
QUIZ: Can you score 18/18 in this tricky geography quiz?
The 50 most iconic songs of all time* have been revealed
CONFIRMED: Glorious normality beckons as vast majority of restrictions to be scrapped
"It will be with me until I die" - Charlie Bird opens up about "loveliest gesture" from Daniel O'Donnell
You may also like
4 months ago
Olympia Theatre in Dublin to be renamed as part of new sponsorship deal
2 years ago
Awkward moments at the Olympia as Jonathan Van Ness expresses "love" for Leo Varadkar
2 years ago
Hermitage Green announce Halloween Dublin show
2 years ago
Two Door Cinema Club announce Dublin and Belfast shows
2 years ago
WATCH: Dermot Kennedy lights up the streets of New York in his new video
2 years ago
Chasing Abbey forced to cancel tonight's Olympia gig
Next Page