He has previous with this kind of thing.

Another year, another Eurovision, another controversy. To be fair, though, at least SuRie had something of an excuse, as her song was interrupted by a protestor.

After storming the stage and grabbing the mic, the man appeared to shout: "For the Nazis of the UK media we demand freedom". He was quickly ushered offstage by security and SuRie managed to complete her performance.

It appears seems that the stage invader has previous with this kind of thing, having stormed the stage last year during the final of ‘The Voice’ final last year. He also tried the same stunt at the National Television Awards. He goes by the name 'Dr ACactivism’ online.

He was taken into police custody following the disruption and the European Broadcasting Union issued a statement following the incident. 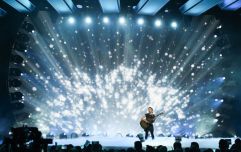 Ireland are looking for youngsters to represent us at Junior Eurovision

END_OF_DOCUMENT_TOKEN_TO_BE_REPLACED

"The EBU regrets a stage invasion took place during the UK performance. The person responsible is currently in police custody," it read.

"The UK singer SuRie and her team were offered the option to sing again but decided not to because they were extremely proud of her performance and have decided that there is absolutely no reason to perform the song again."

At the NTA's Dermot O'Leary was forced to confront him and see him off stage. As the Australian commentator Joel Creasey said, he's an "absolute cockhead."


popular
The lineup for this week's Late Late Show has been revealed
QUIZ: Can you guess the pixellated movie posters?
QUIZ: Can you name all these European countries just from their vowels?
Met Éireann says there's a risk of snow for parts of Ireland this weekend
QUIZ: How many of these Recess characters can you name?
Man being treated for suspected case of coronavirus in Belfast
Star Trek: Picard mostly manages to boldly go where no Star Trek show has gone before
You may also like
5 months ago
Will Ferrell's Eurovision movie will star Pierce Brosnan as "the most handsome man in Iceland"
8 months ago
UK's last-placed Eurovision entry has points tally lowered after contest
8 months ago
WATCH: 25 years later, the power of Riverdance feels as strong as ever
10 months ago
Ireland has revealed its contestant for this year's Eurovision Song Contest in Israel
1 year ago
This is Ireland's entry to the Junior Eurovision Song Contest in Belarus on Sunday night
1 year ago
RTÉ are looking for entrants for the 2019 Eurovision Song Contest
Next Page