He has spoken out.

The internet has been talking about the documentary that followed the life of the controversial singer R-Kelly that was released recently.

Kelly has been dogged by controversy throughout his career.

END_OF_DOCUMENT_TOKEN_TO_BE_REPLACED

In 2006, the singer stood trial on child pornography charges but was found not guilty. He had also been accused of illegally marrying the late singer Aaliyah illegally when she was only 15 years old.

The documentary has caused a number of people to criticise R-Kelly for his behaviour. One of these critics is the R&B singer John Legend.

Legend appeared in the documentary, and he has been heavily praised following its release.

He took to Twitter to speak about the praise he has been getting, and how he feels like there was nothing "courageous" about his appearance.

To everyone telling me how courageous I am for appearing in the doc, it didn't feel risky at all. I believe these women and don't give a fuck about protecting a serial child rapist. Easy decision.

He also said that the survivors were deserving of "some kind of justice".

We should all thank my friend @dreamhampton for her very necessary work to create #SurvivingRKelly. These survivors deserved to be lifted up and heard. I hope it gets them closer to some kind of justice.

This isn't the first time that Legend has lived up to his name either.

He sent Kanye West a sensible text while the rapper was on a pro-Trump rant on Twitter, and we have loved him ever since. 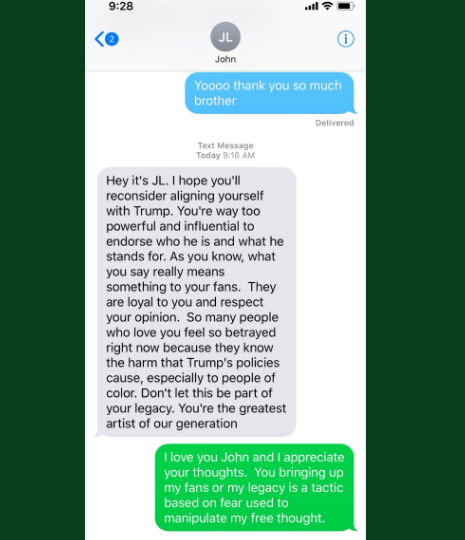 popular
QUIZ: Test your knowledge with this Ultimate Friends Character Quiz
House Of The Dragon is already better than Game Of Thrones
The 50 most iconic songs of all time* have been revealed
Amazon Prime Video has just added 20 very big movies to its library
Netflix has dropped the trailer for their latest thriller from the creator of The Haunting of Hill House
Fine Gael Councillor slams attendees of cost of living crisis protests
One of cinema's greatest flops is among the movies on TV tonight
You may also like
11 months ago
R Kelly convicted of racketeering in sex trafficking trial in Brooklyn
3 years ago
R. Kelly to stand trial next year
3 years ago
R Kelly has been arrested on federal sex trafficking charges
3 years ago
A new Lifetime documentary on R. Kelly will air next month
3 years ago
Judges will allow cameras in the courtroom for R. Kelly's sex abuse trial
3 years ago
WATCH: The parents of one of R. Kelly's live-in girlfriends discuss his relationship with their daughter
Next Page