Justin Timberlake's career isn't over, but here's 5 reasons why maybe it should be

Justin Timberlake has had a difficult few days.

Well, as difficult as it gets for an A-list superstar musician and actor, at least.

Friday saw the release of Man of the Woods, an album that many have quickly declared the worst of his career. It might be.

END_OF_DOCUMENT_TOKEN_TO_BE_REPLACED

To call it that is to ignore the tying up of a contractual obligation that gave the world both halves of Timberlake's 20/20 Experience, a project littered with so many wrong-headed choices that it made you question the strengths that brought the guy to the dance in the first place.

You can't say that his rise and immediate acceptance as a major player was a fluke.

A fluke implies that we're dealing with a one-off moment in time where stars aligned and magic was realised.

Fact is, Timberlake's first two solo albums have too many good - and great - songs to dismiss him outright. Even 2013's 'Mirrors' feels like an all-timer some five years on, but the cracks began to show on its parent album.

END_OF_DOCUMENT_TOKEN_TO_BE_REPLACED

Trailered by the supremely awkward 'Filthy', Man of the Woods amounts to what most feared it would; a bizarre mix of Americana country wanderings and the contemporary R&B/pop marriage that propelled Timberlake to the top of the mountain.

Only it doesn't work. At all.

At the time he emerged, drenched in neon and smoke, at the U.S Bank Stadium in Minnesota on Sunday night, Timberlake was facing down a barrage of vicious reviews. By the time he clambered off the stage, he had been mauled anew.

The knives are out. His status isn't really in jeopardy, or at least it shouldn't be.

As the Pitchfork review of Man of the Woods notes in its closing remarks, Timberlake is unusually untroubled to date, and we shouldn't anticipate his armour crumbling any time soon:

"At no point has his ascendance been interrupted by anything like negative consequences. He played a pivotal role in one of this century’s defining TV controversies and was happily invited back to the scene of the crime little more than a decade later.

"He rush-recorded and released a massive two-part album to fulfill contractual obligations and was welcomed back into the music industry with arms wide open. He wore a full denim suit and cowboy hat on the red carpet; he played a crucial role in The Love Guru. None of it mattered."

END_OF_DOCUMENT_TOKEN_TO_BE_REPLACED

However, he has made serious missteps in the past five years or more, and they have shattered an extremely compelling illusion to the point that his undisputed presence as a brilliant, bulletproof entertainer is in doubt.

So, how did we get here, then?

Let's start with the most recent stumble.

It takes serious balls to return to the scene of such a high-profile crime.

Timberlake taking that sweet, sweet Pepsi money to perform at the Super Bowl half-time show 14 years after the infamous Janet Jackson 'wardrobe malfunction' is a heel move so spectacular that it belongs not on the American football field, but in the middle of the ring at WrestleMania.

Sunday night's action may have delighted the crew from It's Always Sunny in Philadelphia, but Timberlake's performance was as by-the-numbers as these things get.

Choreography and medley enthusiasts rejoiced as the proud son of Tennessee went through the motions, splicing in back catalogue highlights alongside dodgy new material in a bizarrely subdued production for this sort of thing.

Prince, despite being dead for almost two years, had more life in him than his corporeal counterpart during their ill-advised 'duet', while Timberlake managed to make 'My Love' sound bad, which takes some doing.

He finished up by quipping "Super Bowl selfies!" like an uncle at a wedding desperately trying to be Down With The Kids, blissfully unaware of the painful truth. 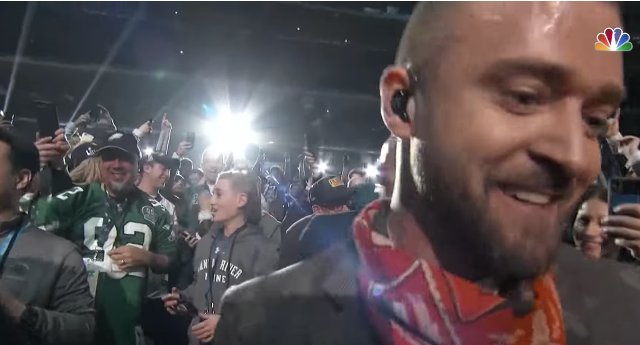 But hey, at least we got a decent meme out of it.

Timberlake has always traded in the highest realms of pop music, enjoying every studio trick and ace producer available to him, but his recent work is feverishly coated in a generic gloss and sheen that renders the vast majority of songs hollow, forgettable and just plain bad.

Double-album projects should almost always be approached with caution as they're usually an exercise in self-indulgence and/or a collection of B-sides tacked on for no real justifiable reason.

In this case, it was both. Despite that aforementioned contractual obligation, Timberlake's bloated odyssey is very much an artist believing their own hype, throwing quality control aside in favour of more, more, more.

The first part has its moments, but is ultimately unmemorable.

The second part is flat-out dreadful, culminating in one of the soppiest ballads anyone has ever penned and released in the form of 'Pair of Wings', a hidden track that really should have living up to its billing and remained lost.

Amazingly, he'd outdo that one. Speaking of...

Yeah, the year is only 36 days young, but I'm sorry to spoil the year-end list already. There won't be a single major release this year as deliciously awful as Man of the Woods.

It's that dreaded time in a musician's career when they're deliriously happy and thus the work becomes a saccharine hodgepodge of Where They're At Right Now.

Nobody wishes ill on Timberlake, his wife Jessica Biel or their young son Silas, but happiness has numbed him as an artist.

Man of the Woods is a union of marital glee and rediscovery of roots as Timberlake suddenly remembers that he hails from Memphis and therefore should dabble in country music now.

As with all modern pop albums, there seems to be a law about it being ridiculously long, so we get sixteen tracks over the course of one hour and six minutes.

It's no exaggeration or hyperbole to state that literally all of them are bad, and none of them are any good. 'Filthy' simply doesn't work, and the clutch of subsequent singles are all over the place.

The tracklist made everyone giggle when they saw 'Flannel' on there, and while Timberlake's ode to clothing favoured by lumberjacks everywhere is indeed terrible, it's not the worst offender here. Try sub-Robin Thicke adventures like 'Sauce' or the clumsy Americana of the title track on for size.

Oh, and the album concludes with his cooing toddler getting involved, because of course it does.

"But man, he's great in The Social Network," you argue, and you're right to bring it up, reader.

He's also pretty good in Inside Llewyn Davis, for what it's worth.

And hey, that bit in Southland Tales where he lip-synced to The Killers was kind of fun:

Here's the rub, though; in those first two films mentioned above, he was working with excellent directors who understood that using him specifically and sparingly made for the best result.

As a leading man, he can't hold the screen, and is merely good-looking wallpaper in duds like In Time, Runner Runner and Friends With Benefits.

The press release for Man of the Woods was at pains to point out that Timberlake is "a gifted actor", though rather undermined that by immediately championing Shrek The Third among his cinematic accomplishments.

Onscreen, he's grand, but he could use a revelatory turn soon and appearing in an upcoming Woody Allen film is the worst kind of gamble to take right now.

5. He's never, ever, going to write a song as good as 'My Love' again for as long as he lives.

It's not happening. Not today. Not tomorrow. Not ever again.

popular
NOW announces large reduction to its monthly membership prices
Fish and chips could be removed from Irish menus over rising fuel costs
Amazon Prime Video has just added 51 big movies to its library
Netflix has just added 33 very big movies to its library
The full list of cancelled flights in and out of Dublin Airport on Monday (so far)
Increase in passenger charges at Dublin Airport may be on the way
Waterford man sentenced to three months imprisonment for operating "cruel and illegal" puppy farm
You may also like
4 days ago
The JOE Friday Pub Quiz: Week 301
5 days ago
QUIZ: Can you guess the pixelated album cover?
1 week ago
Lizzo pledges $1 million for Planned Parenthood and abortion funds
1 week ago
Dave Grohl performs for the first time since Taylor Hawkins' death
1 week ago
We've put together the ultimate playlist for Pride Weekend 2022
2 weeks ago
Acclaimed traditional Irish guitarist Dennis Cahill has died, aged 68
Next Page