WATCH: Lewis Capaldi's reaction to his Dublin neighbours having sex is comedy gold

It's safe to say Lewis Capaldi isn't sleeping too well during his stay in Dublin.

Lewis Capaldi is one of the hottest prospects in the music business.

His song 'Someone You Loved' is number one in the charts at the time of writing, and his social media accounts are constantly providing fans with endless amounts of entertainment. 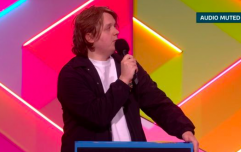 END_OF_DOCUMENT_TOKEN_TO_BE_REPLACED

And as it happens, he's also the warm-up act to Picture This during their five night stint in Dublin's 3Arena.

By all accounts, the Scottish singer has performed brilliantly so far, but he could be forgiven for being a little bit tired the next time he takes the stage.

That's because, in whatever hotel he is staying in in Ireland, he hasn't been able to get much sleep, due to the fact that the people staying beside him have been audibly having sex next door.

He took to his Instagram story to complain about the noise, and it is genuinely hilarious.

lewis capaldi reaction to his neighbours having sex while he is trying to sleep 😂😂 pic.twitter.com/E812wArs4M

The Big Reviewski || JOE · The Big Reviewski with Y: The Last Man, that Malignant ending & a secret streaming service
popular
Aer Lingus announces flight sale as US to lift travel ban for vaccinated EU passengers
Cork City Centre described as a "no go area" after man pulled from wheelchair in violent attack
The Big Reviewski JOE Movie Quiz: Week 120
Wally the Walrus "well on his way home" after being spotted in Iceland
Fine Gael Senator says it's "not acceptable" Metro North could be delayed until 2034
The weather for the week ahead looks very autumnal indeed
Green Party Councillor calls for smoking ban in outdoor dining areas
You may also like
1 year ago
The JOE Music Quiz: Week 3
1 year ago
Lewis Capaldi's 'Someone You Loved' officially the biggest song in Ireland for 2019
2 years ago
WATCH: Lewis Capaldi belts out 'Someone You Loved' on the Late Late
2 years ago
Lewis Capaldi had the nation in stitches during his Late Late appearance
2 years ago
"I don’t forgive people" - Noel Gallagher opens fresh war of words with his brother
2 years ago
WATCH: Liam Gallagher weighs in on the Noel Gallagher VS Lewis Capaldi beef
Next Page