Lewis Capaldi sent the audio guys at the Brit awards into meltdown on Tuesday night as he presented an award to Dua Lipa and descended into chaotic swearing on live TV. The 24-year-old singer, who is known for his chart-topping anthems, greeted the audience with a to-the-point, "Hello motherf***ers!". He was then hastily muted by ITV before it was lifted and another swearword slipped out as he said: "I'm f***ing s-"

Once again, he was muted continuously before pausing and said: "Sorry, I was reading off a card here - 'how is everyone doing?' 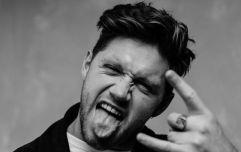 "The madness has happened around me" - Niall Horan in conversation

END_OF_DOCUMENT_TOKEN_TO_BE_REPLACED

To be honest, it was quite difficult to understand anything else he said through the muting, and fans were quick to flock to Twitter to discuss. One fan was absolutely delighted with the turn of evening saying, "Lewis Capaldi saying 'hello mother****ers' live at the brits will forever be burned into my brain I love him sm."

One fan was quick to outline the singer's iconic status:

Love him or hate him, you have to admit Lewis has a way with words, even if we'll never get to hear them.

The Big Reviewski || JOE · TBR Spotlight: Loki - Episode Two - 'The Variant'
popular
The Queen appealing for volunteers to weed the garden of her Sandringham Estate
Man in his 60s killed following assault at home
400,000 people waiting on second AstraZeneca not permitted to travel abroad under "vaccine bonus"
Gardaí will use "discretion" over outdoor drinking at pubs and restaurants
Gardaí have said people can't drink alcohol in newly set up outdoor seating in front of bars
QUIZ: Can you name all these European countries from a list of cities?
QUIZ: Can you get full marks in this potentially very frustrating general knowledge quiz?
You may also like
1 year ago
The JOE Music Quiz: Week 3
1 year ago
Lewis Capaldi's 'Someone You Loved' officially the biggest song in Ireland for 2019
1 year ago
WATCH: Lewis Capaldi belts out 'Someone You Loved' on the Late Late
1 year ago
Lewis Capaldi had the nation in stitches during his Late Late appearance
1 year ago
"I don’t forgive people" - Noel Gallagher opens fresh war of words with his brother
1 year ago
WATCH: Liam Gallagher weighs in on the Noel Gallagher VS Lewis Capaldi beef
Next Page