The Cure are coming to Dublin.

The Cure will return to Ireland to play their first headline show in seven years next summer, with Malahide Castle confirmed as the venue on Thursday morning.

The band are will perform at the venue on Saturday, 8 June 2019, subject to licence. If you're a fan of Metallica, this may prove to be an issue. 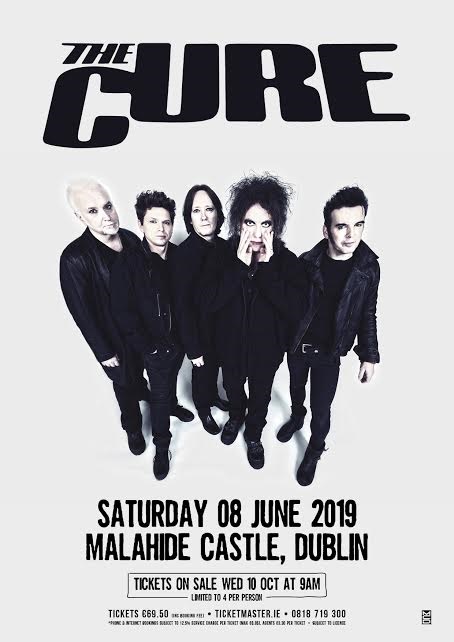 END_OF_DOCUMENT_TOKEN_TO_BE_REPLACED

The Cure celebrated their 40th anniversary in July with a very special sold-out concert in London’s Hyde Park, almost 40 years to the day since their first ever show.

Tickets priced €69.50 including booking fee go on sale this Wednesday, 10 October at 9am from Ticketmaster outlets nationwide.

House of Rugby Ireland · Ireland's feel-good win, Casey's initiation song, scrapping Sexton and Scott Williams interview
popular
Eoghan McDermott to leave RTÉ after six years (Report)
€17,500 worth of cocaine found at street party in Limerick
Sony are giving away a free game to all PS4 and PS5 owners
25 more people with Covid-19 have died in Ireland, 566 new cases
One man has been charged following Limerick street party, 50 FPNs issued
NUIG students told to write 2,000 word essay for breaching Covid rules
One of the most fertile men in Ireland is a guest on tonight's Claire Byrne Live
You may also like
4 days ago
The JOE Music Quiz: Week 46
5 days ago
Bruno Mars and Anderson Paak join forces for new joint album
5 days ago
Ireland's entry for the 2021 Eurovision song contest has been revealed
1 week ago
Daft Punk confirm split after 28 years
1 week ago
JOE’s Song Of The Day #884 – Philip Noone 'Say Anything But A Goodbye'
1 week ago
The JOE Music Quiz: Week 45
Next Page