As comeback stories go, even Mark McCabe would admit that his is fairly unlikely.

And yet, here he sits, smiling in a Dublin café a handful of hours after the official unveiling of 'Over Me' - the latest venture for the record label that first signed him up around the turn of the century when charts were topped and Meteor Music Awards were won.

END_OF_DOCUMENT_TOKEN_TO_BE_REPLACED

In between, he's kept busy, enjoying a long stint at RTÉ where he eventually served as 2FM's Director of Sound and Music. A move to iRadio followed, while overseeing various projects and dance floors has ensured that Mark McCabe has never really stopped moving forward, even if some shadows are impossible to fully outstep.

We'll get to that. First comes his return as an artist proper, the machinations of release day, and how that looks in a modern setting.

Spotify is god-king in 2018, boasting the power to make or break an artist via algorithms and coveted curated playlists, specifically its New Music Friday UK offering, which included 'Over Me' among the latest 70-odd collection.

With a genuinely overwhelming amount of new tracks uploaded to the streaming service each month - believed to be the in the region of half a million - the fight for breathing space is very real.

END_OF_DOCUMENT_TOKEN_TO_BE_REPLACED

"The higher up you are on that playlist, the more chance you have," notes McCabe.

"It’s the go-to now for a lot of radio programmers. The first thing they’ll do on a Friday is check what’s on there, so it’s more powerful than any kind of label distribution or anything like that, because it’s certified in a way by Spotify and you can get this kind of endorsement."

A deliberate salute to the style employed on Benny Benassi and Chris Brown's 'Paradise' from a couple of years back, 'Over Me' isn't about to change the world, but then it's not really supposed to. Designed with a sun-kissed mass market in mind, it makes sense on its own global-grasping terms.

END_OF_DOCUMENT_TOKEN_TO_BE_REPLACED

While at 2FM, McCabe had a five-second rule. If a new song didn't grab him in that timeframe, it was on to the next one. Ruthless enough, but in the fast-paced context of commercial radio, you can see the argument. Does 'Over Me' pass such a stern test?

"I think so," he smiles. "I hadn’t listened to it in a long time because I purposely stepped away from it. When you’re producing a track, you know everything about it, every little detail.

"It’s good to take a break away and then you go back and you forget things that you’ve done, and things that might have been annoying you during the process don’t annoy you as much.

"Things that you thought were good aren’t so good, and vice-versa. I listened to it last night for the first time in a while and I was kind of like, ‘You know what? That’s actually not that bad!’"

He's currently signed to a multi-single deal at Universal Music Ireland, where Managing Director Mark Crossingham explains that despite a change in how we consume music, the public still rules all.

"It’s a cliché, but it always has been, and always will be, about music and the hits," he says - and having cut his teeth in the music industry in the mid-1980s by driving around London with a car full of vinyl in order to keep record store supply and demand in check, he should know.

These days, Crossingham treats the charts like a kind of religion, sifting through the mountain of public consciousness data presented by Spotify, Apple Music, Shazam et al each and every morning.

"If you’ve got hit records, it doesn’t matter what the platform is," he argues.

"Part of the reason for signing Mark was that he’s got hit records, but he's also quite well-rounded as an artist and a producer. He sees what works on dance floors, he knows what works on the radio."

He has a fair shout about knowing what might work for other artists, too. Regularly in demand on the remix front, McCabe has provided remixes for the likes of Jamie Lawson, James Arthur and Dagny in recent months.

"It’s a really interesting progression of music," he argues, likening the process to taking somebody's carefully constructed picture and scribbling all over it with crayons. McCabe prefers for things to be collaborative when trying to stay sympathetic to an original while simultaneously looking to establish something bigger and more palatable.

There's a method to the madness, even when needs must. Returning to production three years ago, all McCabe had at his disposal was a laptop. As such, his rejig of Gavin James' 'Nervous' was knocked together in a coffee shop before its release two summers ago.

"That’s the beauty of technology, it allows you to do that," McCabe says. "The zone that you’re working is much smaller, but the scope that you have to create has gotten much bigger.

Ah, yes. 'Maniac 2000' and the bizarre though undeniable cultural touchstone that may well outlive us all. Is Mark McCabe at all stunned that 18 years on, the track still connects with people?

"Absolutely," he laughs. "It defies all logic! It’s so bad that it kind of goes full circle. I’ve gone through so many different phases with it - I’ve been proud of it, I’ve hated it, I’ve shunned it. Three years ago at Electric Picnic, I went and expected literally 150 - 200 people to be there, and I thought, ‘Oh, this is going to just be so sad, it’ll be a bunch of 45-year-olds up the front’ and when I walked over I got a text saying ‘Already full’ and this was an hour before I was due to go on.

"There was just this air of anticipation. It just went off. To me, that was the first time where I kind of got a sense that actually, fuck what people have said to you. Because you always focus on the negative. One person says something bad, and you listen to them, it’s just this theme and this instinct that you have." 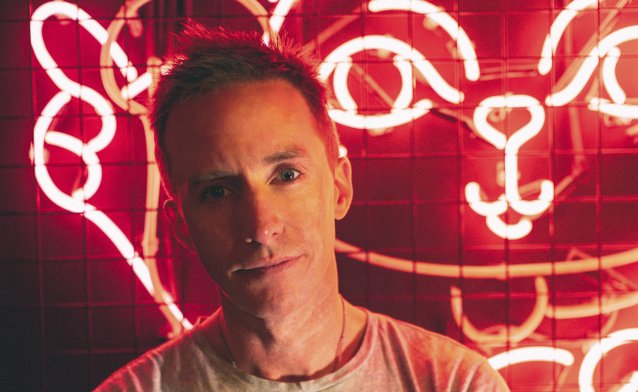 Over time, McCabe would learn how to tune that noise out.

"You’re never going to please everybody," he admits. "That’s what I was always trying to do... 'I’ve got to redeem myself, I’ve got to put these tracks out there.' I’ve worked with musicians; I toured America with The Devlins, I worked with Ken McHugh of Autamata, doing front of house for him. I worked in music shops. I mixed for bands. I know what music is. I know what a real song is. I know what emotion in a song is.

"And when you’re presented as the guy who did ‘Maniac 2000’ and you’re amongst real songwriters... it’s really embarrassing. The funny thing is that most of them don’t care. The Picnic, though, was a certification of - whatever anybody says, if something makes people emote and they enjoy it and they have a good time, then who cares? That’s what it’s about, ultimately."

He takes a moment to consider the strange generation-spanning legacy of a song that just won't fade out.

People tend to lose their minds in different ways, be it elation or something less edifying.

Some of the more unforgiving reaction to the tragic passing of Avicii ensured that you didn't need to look too far to find people scoffing at the idea that a musician can become a legitimate superstar via a less traditional instrument than an electric guitar.

McCabe, as it happens, has an arresting term for that myopic way of thinking.

"Musical racism," he asserts. "That’s what it is. It’s where people won’t allow other people to enjoy what they want. You have to listen to what I listen to. And that’s fine, be like that if that’s the way people want to be. Look, there’s this ongoing debate, even now, that you’re not a proper DJ unless you use decks, or if you don’t use the sync button.

"Martin Garrix goes and does a show. He’s got tons of cue points in the sense that he’s got pyrotechnics firing, he’s got lighting cues, laser cues, video cues, the works. It’s not possible for somebody to just go along, play a DJ set, and for it all to be synced. And people want a show."

For McCabe, pre-production is just as essential as the resulting performance.

"I don’t think there’s anybody up at that level rocking up to a festival and pressing play without having justified what they’ve done," he notes. "Deadmau5 has admitted that that’s what he does, but he’s done all the work in advance in the studio.

"When you go and see him, you’re seeing more. You’re seeing the visuals and the creatives and the graphics, and that side of it. If Martin Garrix comes to a show and presses play on a laptop and the rest of the time he’s just sitting there throwing his hands in the air, so what? He’s done the work."

And the work continues for Mark McCabe in that usual little-bit-older, little-bit-wiser way.

"To get a second go is amazing," he nods. "I think I’m much better prepared now, because I’ve got the experience behind me. I’m still not 100% happy with the quality of my productions, but it’s definitely improving as time goes on. It’s definitely getting better and better, and I’m at a point now where I’m ready to really give it a go, but to give it a go beyond Ireland."

"I don’t think I can fully reinvent here," he acknowledges. "I just don’t think it’s going to happen. But I can abroad. That said, the flip side is the reaction to a normal DJ set versus a DJ set where I do ‘Maniac’ and everyone loses their minds is slightly… deflated.

"The hope is to develop the other side of it. The funny thing about that track is the less I do of it, the more it grows. And I’ve maintained that stance. I don’t need to push it, I don’t need to promote it, if people want to go off and find it and make me a part of it, then that’s fine. It has its own life."

popular
Amazon Prime Video has just added 21 big movies to its library
Netflix has just quietly added 12 big movies to its library
The 50 most iconic songs of all time* have been revealed
Seven more suspected cases of unexplained hepatitis in Ireland under investigation
Gardaí investigating firearm being discharged near film set in Donegal
Couple injured after alleged homophobic attack in Dublin
Passengers warned that Dublin Airport situation is simply "unpredictable"
You may also like
2 days ago
The six Eurovision countries with "irregular voting patterns" have been revealed
3 days ago
Eurovision producers reveal "irregular voting patterns" during Saturday night's final
1 week ago
U2 perform in Kyiv metro station following invite from President Zelensky
3 weeks ago
QUIZ: Can you match the one-hit wonder to the artist?
1 month ago
One of the best music documentaries ever made has just been added to Netflix
2 months ago
WATCH: Last Week Tonight explains why concert tickets have become so expensive
Next Page