Chalk these dates down.

Noel Gallagher and his High Flying Birds are back with their third album called Who Built The Moon? (good question rkid).

It will be released on 24 November 2017 and is set for prompt live treatment as Gallagher and band announce a 2018 World Tour.

There are some pretty cool song titles on the new album also... 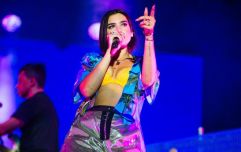 END_OF_DOCUMENT_TOKEN_TO_BE_REPLACED

Live arena shows start in April 2018 across the UK & Ireland and go on general sale at 9am, this Friday 29 September 2017 with details, links to purchase tickets and tour updates available at www.noelgallagher.com


popular
Dozens of Ireland's best landmarks to have free entry for first ever Tourism Day
Here's Week 21 of JOE's 19 in 90 quickfire quiz
Interactive infographic shows real-time spread of coronavirus outbreak
Ireland's best places to work for 2020 have been revealed
Met Éireann issues four separate weather warnings as Storm Jorge approaches
QUIZ: What movie/TV show are these fictional sports teams from?
Japanese woman tests positive for coronavirus for the second time
You may also like
8 hours ago
Gardaí investigating shooting at a house in North Dublin
1 week ago
Army bomb squad called in over suspect device found in North Dublin
1 week ago
Two men arrested in connection with shooting in Lucan in November
1 week ago
Investigation launched into Phibsborough incident following match
2 weeks ago
Woman arrested after man stabbed multiple times in serious assault in Dublin
3 weeks ago
Rent prices fall for this first time in seven years, but it is still mostly bad news
Next Page