Even by the standards of conspiracy theories, this one is a little far-fetched.

Kurt Cobain, lead singer of Nirvana, one of the most iconic rock bands of all time, died aged 27 in April 1994.

22 years after his death, some are claiming that it was all a conspiracy, basing the theory on footage of a Peruvian singer called Ramiro Saavedra performing a version of ‘Come as You Are’ on a Peruvian talent show, footage which originally aired on 2012 but has gone viral again recently.

END_OF_DOCUMENT_TOKEN_TO_BE_REPLACED

Granted, Saavedra bears a slight physical resemblance to Cobain and sounds a little like he did when he was alive over two decades ago, but to suggest that it provides evidence Cobain is still alive is ridiculous in the extreme.

Nearly as ridiculous, in fact, as the suggestions that Michael Jackson is still alive based on the sight of a pile of clothes in an Instagram picture taken by his daughter earlier this year.

END_OF_DOCUMENT_TOKEN_TO_BE_REPLACED

Besides, as if it matters, Saavedra plays guitar right-handed; Cobain played the guitar with his left hand.

As you can probably tell, it wasn’t something they were taking entirely seriously… 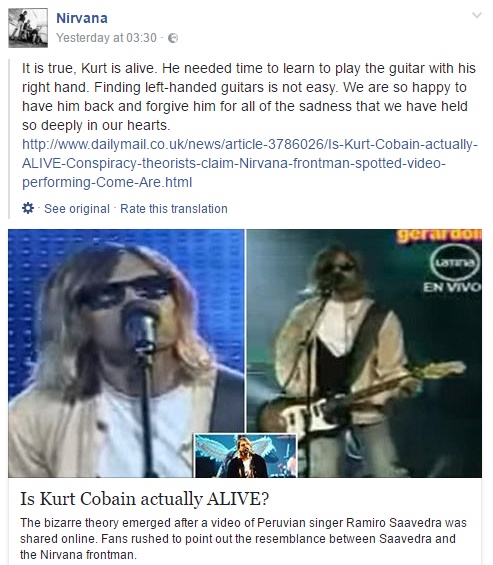 popular
People want "offensive" Crown Paints advert banned after attracting hundreds of complaints
Netflix has just added 23 very big movies to its library
Human remains found in suitcases are the bodies of two children
Disney+ has just added 10 big movies to its library
The prequel to one of the best twists of all time and 7 more movies & shows to watch this weekend
A terrific '90s crime drama is among the movies on TV tonight
The 50 most iconic songs of all time* have been revealed
You may also like
22 hours ago
QUIZ: Can you identify the famous song from the opening line?
2 days ago
Pop Idol star Darius Campbell Danesh has died, aged 41
6 days ago
The 10 must-watch events at the 2022 Dublin Fringe Festival
1 week ago
Family of Ashling Murphy share heartbreaking tribute at Fleadh Cheoil
2 weeks ago
Taylor Swift responds after report claims she has the highest celebrity private jet emissions
2 weeks ago
The JOE Friday Pub Quiz: Week 305
Next Page