He’ll be hearing about this one from the missus ‘til kingdom come.

Tickets for Coldplay’s gig at Croke Park went on sale on Friday morning and as you’d expect, there was the usual mix of delight from fans lucky enough to get some and frustration from those who weren’t so lucky.

If you were one of the unlucky ones, by the way, you may be interested in this explanation from Ex-Ticketmaster CEO Nathan Hubbard on why it’s so hard to get tickets for the most in-demand concerts.

There’s a long way to go between now and next July, of course, and fans have already been taking to the Coldplay at Croke Park Facebook page looking to buy and sell tickets to what will be one of the biggest gigs of next summer.

END_OF_DOCUMENT_TOKEN_TO_BE_REPLACED

One Irishman had what he thought was a very good and very romantic motive for buying tickets for himself and his girlfriend, but he decided to put them up for sale again yesterday evening after his girlfriend reminded him that his memory isn’t as good as he thinks it is.

His account of Friday’s events, which has garnered over 13,000 likes, 276 shares and 871 comments at the time of writing, is well worth a read. 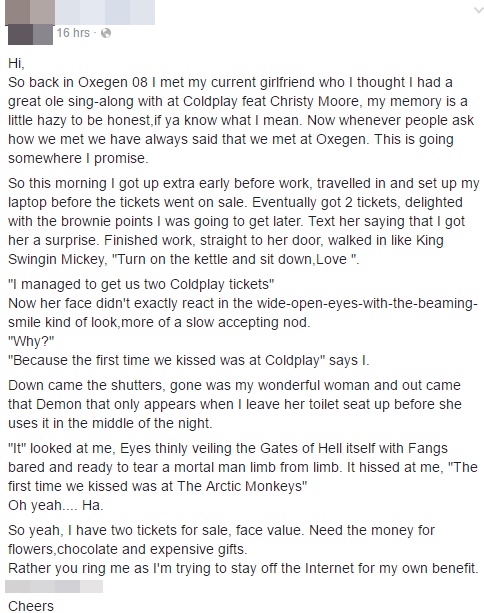 So many brownie points gone to waste.

popular
Jeffrey Dahmer’s dad thinks he knows what’s to blame for son becoming a serial killer
€600 energy credits and free schoolbooks for children set to be announced in Budget 2023
QUIZ: Test your knowledge with this Ultimate Friends Character Quiz
QUIZ: Name the country for each of these non-capital cities
House Of The Dragon is already better than Game Of Thrones
Amazon Prime Video has just added 20 very big movies to its library
Fine Gael Councillor slams attendees of cost of living crisis protests
You may also like
1 week ago
The JOE Friday Pub Quiz: Week 312
2 weeks ago
The JOE Friday Pub Quiz: Week 311
2 weeks ago
Drugs, dancing, and drenchings: Confessions of an Electric Picnic attendee
1 month ago
The JOE Friday Pub Quiz: Week 309
1 month ago
QUIZ: Can you identify the famous song from the opening line?
1 month ago
Pop Idol star Darius Campbell Danesh has died, aged 41
Next Page