Ed Sheeran's setlist from last night has been revealed

By all accounts, Sheeran killed it in Cork last night.

We all know that Mayo fans love to get celebrities across the world to jump on the #MayoForSam bandwagon, but judging by Ed's performance in Páirc Uí Chaoimh he's already got his colours pinned to the mast.

Ed Sheeran endeared himself to the rebel county last night by performing in a Cork GAA jersey throughout the set. Footage from the venue make it look like a spectacular night.

What a fantastic first concert in the new stadium!
We look forward to doing it all again tomorrow! #EdCork #EdIrishTour pic.twitter.com/rcTlBoUxyK END_OF_DOCUMENT_TOKEN_TO_BE_REPLACED

Website Setlist.fm has also posted Sheeran's setlist from last night, which should give his fans some hints as to what they can expect if they've got tickets for any of his Irish dates throughout May. It certainly looks like Sheeran was playing the hits. 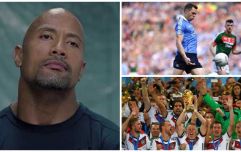 END_OF_DOCUMENT_TOKEN_TO_BE_REPLACED

Setlist also reports that Sheeran reemerged to give the fans an encore, playing Shape of You and You Need Me, I Don't Need You.

Footage posted to YouTube by Alan McCarthy shows a venue full of people having the time of their lives as Sheeran played a combination of Steve Earle's Galway Girl and his own more recent song of the same name.

popular
Disney+ has just added 10 big movies to its library
The 50 most iconic songs of all time* have been revealed
QUIZ: You'll do well to get 100% in this General Knowledge Quiz
25 years ago, Sylvester Stallone delivered his best performance in a hard-hitting crime drama
Here's the average age people lose their virginity around the world
The JOE Movie Quiz: Week 167
QUIZ: How well do you really know Irish weather?
You may also like
1 month ago
Looking for a hotel room for the All-Ireland Final weekends? It won't come cheap...
1 month ago
Taoiseach condemns "disturbing" fight at Galway v Armagh game
2 months ago
The 2 Johnnies share unbelievable catfish ordeal affecting over 40 people
3 months ago
Limerick hurler arrested following alleged altercation with Tipperary player in Limerick pub
3 months ago
Woman in her 20s dies after accident during Camogie match
10 months ago
Wicklow GAA to investigate fight after Under 15 match on Saturday
Next Page