WATCH: This video of Post Malone singing 'The Auld Triangle' is absolutely mad

Post Malone has had one of the best years of any artist in a long time.

His fame has absolutely skyrocketed following the release of his second album beerbongs and bentleys, and his song 'rockstar' has been streamed over one billion times on Spotify. Yep. Over a billion. 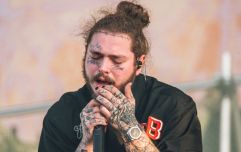 END_OF_DOCUMENT_TOKEN_TO_BE_REPLACED

He is also one of the main events at Longitude this year, so Irish fans of the star have only a few more weeks to wait to see him.

And ahead of this Longitude gig, he has done himself a huge favour...

Backstage at a gig in LA, Irishman Darragh O'Rourke ended up backstage and chilling with Post Malone himself.

As crazy as that story already is, it gets crazier.

He then ended up singing iconic Irish trad song 'The Auld Triangle', with Malone knowing all of the words.

Showed up to a @postmalone concert last night without a ticket...ended up in his dressing room singing The Auld Triangle with the man himself ??‍♂️??‍♂️ 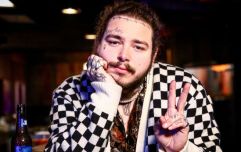 END_OF_DOCUMENT_TOKEN_TO_BE_REPLACED

Irishman Darragh O'Rourke is currently in America on a J1, and he originally showed up to the Post Malone concert in LA without a ticket. He then saw a staff wristband on the ground outside, and decided to chance his arm.

He did have to do a bit of play acting though. This is how O'Rourke remembers the incident:

“I took out my phone where I had this imaginary conversation about experiencing sound issues at the theatre. I was like ‘Ahh yeah. There’s an echo in the building’. I was just winging it. 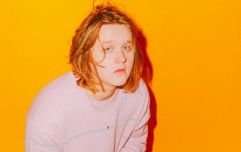 "I listen to my music so f**king much!" - In conversation with Niall Horan's best mate Lewis Capaldi

END_OF_DOCUMENT_TOKEN_TO_BE_REPLACED

"After a while on my phone, I told the security guard that it was all sorted. I flashed the wristband, but she asked for my credentials, which I obviously didn’t have."

"She then says ‘hang on, I’ll get my manager’. So the security manager comes along, flashes at the wristband with his torch, and lets me through. I couldn’t contain myself.”

O'Rourke also spoke very highly of Post Malone himself, saying: "You've no idea, he's the soundest guy ever. He even offered us tickets for Longitude, but we're still on the J1. We're thinking of changing flights!"

So this proves three things to us: 1) You should always chance your arm. 2) Post Malone is a legend. 3) We can't wait to see him at Longitude.


The Architects Of Business || JOE · "It doesn't get bigger than this for me" - Irish scientist wins EY Entrepreneur of the Year 2020
popular
QUIZ: How will you fare in our ‘Not as it seems’ quiz?
Eir CEO says opening a call centre in Sligo was a "mistake" as staff weren't sufficiently skilled
Met Éireann issues fog warning for 12 counties
QUIZ: How well do you remember the final season of Game of Thrones?
Principal of Carlow school denies claims female students were asked not to wear tight leggings to school
Can you get top marks in Week 57 of JOE's 19 in 90 quickfire quiz
The 50 most iconic songs of all time* have been revealed
You may also like
1 year ago
Post Malone releases new song, gets into the Christmas spirit
2 years ago
Four huge names announced as headline acts for Reading and Leeds Festival 2019
2 years ago
Post Malone collaborated with Crocs and they sold out in less than a day
2 years ago
Post Malone announces Irish gig in February
2 years ago
WATCH: Post Malone and Jimmy Fallon were giving it socks during this singalong of The Wild Rover
2 years ago
Irish Official Charts reveal Ireland's Top 40 songs of the summer
Next Page