Fresh from his set at Longitiude, Post Malone decided to keep the party going by heading into Temple Bar after his performance ended. After all, what else did we learn from his track 'Rockstar?"

Aside from having one of the most unique and remarkable voices in modern music, it's clear that the rapper has a clear love of traditional Irish music. 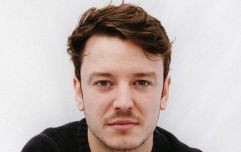 END_OF_DOCUMENT_TOKEN_TO_BE_REPLACED

He might be interested in Beerbongs & Bentleys but it's clear that he's also a fan of a good Irish singalong because after belting out The Auld Triangle a few weeks ago, he's back performing with a trad band.

The singer headed to the Old Storehouse Pub in Dublin's Temple Bar last night but he wasn't alone.

Take a look as he plays Bob Dylan's famous track Don't Think Twice, It's All Right and a few other tunes.