Rod Stewart is coming to Cork in 2019

Tickets will sell out quick for this one.

The legend that is Rod Stewart has announced that he's going to be playing a gig in Cork.

The music veteran will play Cork's Páirc Uí Chaoimh on 25 May in 2019, so you have loads of time to get excited over it.

But you don't have loads of time until the tickets go on sale...

Stewart is, however, making sure that all of his biggest fans got their hands on tickets.

If you pre-order a copy of his upcoming album Blood Red Roses by 24 September, you will receive exclusive pre-sale access to the show in May.

The ticket pre-sale will then begin at 10am on Wednesday 25 September, and you will receive an access code and purchase link via email that same evening. 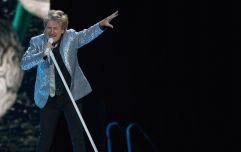 END_OF_DOCUMENT_TOKEN_TO_BE_REPLACED

If you don't want to miss out, more information can be found here.

If you fancy taking your chances and want to just order tickets normally, they will go on sale to the general public on Thursday 27 September at 9am on Ticketmaster.

If the concert is half as entertaining as his antics at the Scottish Cup fifth round draw were, you're in for a treat.


popular
QUIZ: Can you guess the pixellated movie posters?
QUIZ: Can you name all these European countries just from their vowels?
Dublin pub to host a 'doggy date night' where you can bring your dog to dinner
QUIZ: Week 16 of JOE's 19 in 90 quickfire quiz is here
Here are Ireland’s favourite takeaways, as per the National Takeaway Awards
"Totally unacceptable." Final year students at WIT hit out after extra module added to final semester
Fine Gael and Fianna Fáil say Sinn Féin's rent-freeze proposal is unconstitutional. We asked a constitutional lawyer
You may also like
10 months ago
WATCH: Rod Stewart gets emotional after gift of 1916 poetry book from Ryan Tubridy
1 year ago
BBC respond to Rod Stewart's claim that they stopped him performing Irish ballad due to 'anti-English overtones'
3 years ago
WATCH: Rod Stewart's theatrical behaviour spiced up the Scottish Cup fifth round draw
1 month ago
Camila Cabello apologises after racist posts she made as a teenager resurface
1 month ago
Snow Patrol announce intimate Dublin acoustic show
1 month ago
"We've completed Le Galaxie" - Le Galaxie announce break-up
Next Page