Dublin's finest 'Troublemaker' is blazing quite the trail...

It was the manner of Rusangano Family's resounding victory at last year's RTÉ Choice Music Prize that confirmed what many in this country had known for some time.

Whispers from a couple of judges present on the night spoke of a relatively easy night's work, even in the face of what would ordinarily register as especially stiff competition. There simply was no other possible winner.

END_OF_DOCUMENT_TOKEN_TO_BE_REPLACED

Tempting as it may be to cite Rusangano Family as an especially extraordinary case, the reality is that the Limerick/Clare collective perfectly epitomise the changing, exciting, and quite healthy face of Ireland and its wider cultural impact.

The stories expressed so vividly by God Knows, MuRli, and mynameisjOhn on their triumphant Let The Dead Bury The Dead album are compelling, important and relatable. They resonate. They breathe.

Think back to this time six years ago, when a Damien Dempsey-narrated documentary on the Irish rap scene ultimately left an awkward, clichéd impression that arguably betrayed the very subculture it sought to promote.

Reality Bites: Ireland's Rappers promised a look at "a highly creative and dedicated" scene "with a cast of incredible and sometimes barely believable characters." That latter description suggested a wildly misguided and patronising focus that could anchor the project from the off. And so it proved.

END_OF_DOCUMENT_TOKEN_TO_BE_REPLACED

Jump forward to 2018 and new Irish voices are thriving in the face of finally being taken seriously. One such rising star is Soulé, who has enjoyed a huge 12 months that saw two of her songs - 'Troublemaker' and 'What Do You Know' - surge well past the coveted million-plays mark on Spotify.

In conversation with JOE a few days after taking to the stage in Groningen at the annual Eurosonic Festival - where she represented RTÉ 2fm as their official ambassador - the 24-year-old is in buoyant mood, particularly about Ireland's pulsing status as a hip-hop, rap, and R'nB hotbed.

"I know we keep saying this, but people just don’t know that there’s a scene here," she begins.

END_OF_DOCUMENT_TOKEN_TO_BE_REPLACED

"With Spotify being such a huge platform, getting that amount of plays and being Irish, I’m so proud of it. I love going to the UK and the Netherlands and talking in my Irish accent, and seeing people being like, ‘…What? Who are you?’

"They expect me to be British or they expect me to be from somewhere else, not Ireland, and that to me is amazing. It just makes me proud that we’re doing so well - the likes of Hare Squead, Jafaris, there’s so many of us that are doing things that people think, ‘Oh, that’s not in Ireland,’ but it is."

Born Samantha Kay in London to Congolese parents, Soulé grew up in Balbriggan, where she found a close-knit community that allowed her to develop and eventually thrive as an artist. The local Foróige youth club provided notable creative room to express herself amidst a like-minded group.

"All of my friends there; we all met through music," she notes. "We’d set up band nights at the end of the month, we’d put on shows. It was a way of getting music out there, of bringing it to Balbriggan, and getting young people to go, ‘Oh, I want to join a band and play at that night’, so I’ve always been involved in music, and all of my friends today are musicians.

"The way that they’re successful with their careers - it’s not anything new, they’ve always done it, so I knew they would get far," she continues. "The opposite is the same; my friends knew that I was always singing, always making music, but speaking for myself, I never actually believed that I would get this far. Even now, in it, I have moments of doubt, moments of asking, ‘Am I good enough, am I doing good, am I actually good?’"

At home, Soulé was encouraged by her mother; also a singer, and a notably strong one, according to her daughter. Though she has a 'Plan B' in place - she studied Tourism with French in Dublin Institute of Technology - there is the sense that she's born for the music industry.

Humble beginnings involved working at Disneyland and trying out for Saturday night circus institution The X Factor. A stint in reality TV didn't come to fruition, but how was the audition?

"The best thing I got out of that experience was the constructive criticism. That stayed with me up until now. If someone tries out, they could go far. Whatever feedback you get, you have to just work on it, and you’ll become better and better and better. So yeah, if anyone asked me if they should try it it, I’d tell them to go for it. Go for it full-force and believe in yourself."

Newcomers are one thing, but what of Ireland's legacy acts?

In December, Bono caused something of an uproar when he opined to Rolling Stone that music has "gotten very girly," adding that "there are some good things about that, but hip-hop is the only place for young male anger at the moment - and that's not good."

Soulé has yet to cross paths with the U2 frontman, but as a rising female figure associated with the hip-hop genre, where does she stand on such comments?

"Honestly, I feel like everybody is entitled to their own opinion," she offers. "If he’s experiencing that or has seen that, I can’t say anything about his own experiences. I don’t know what he’s seeing on a day-to-day basis. The music industry has changed so much from when he’s started out up until now, so he can probably see the transition more than I can.

"I can’t really say, ‘Oh, Bono is wrong or Bono is right,’ but as a female, I will always stick up for women and empower women in entertainment and in general. Of course it’s because I am a female and I would love the same support from other females, so that’s my way of going about it, but him saying that, that’s his opinion and it doesn’t change how I see Bono as a legend or anything like that. He’s seen a transition, and I’m in it, but he’s been doing it for years and years." 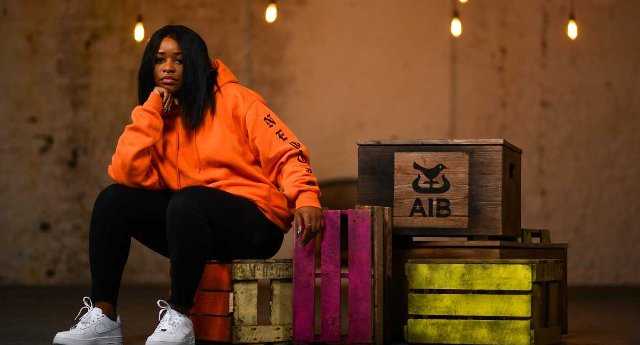 While she intends to make an album at some point, Soulé is no real rush to do so.

Up next is a mentor role at the inaugural AIB Future Sparks Festival; a one-day event that will see over 5,000 second level students hitting up the RDS, Dublin on 22 March for a series of talks, workshops and panel discussions from leaders in the fields of music, food, sport, and social entrepreneurship.

Soulé is onboard as a champion of music, while the likes of former Ireland rugby player Gordan D'Arcy and Dublin hurler Donal Burke will represent their respective areas of expertise. Is it weird to be thrust into such a role so early in her career?

"I love that you said that!" she laughs.

"Everything that happens to me is weird! Getting nominated for the Choice Music Prize Song of the Year last year was like, ‘I’m not supposed to be here, what the hell?’, going through this weird thing. Honestly, it’s an honour, especially because I’ll be speaking to young people and inspiring them about the music industry and [attempting] a career in music.

"That comes naturally to me, but honestly I wish I would have had something like this when I was growing up, where someone would talk with me about what it takes, and what you need to do and have to give in order to carve out a career in music. I think Future Sparks is a great, great opportunity and I’m excited for it. It’s going to be cool."

Soulé was speaking to JOE ahead of the AIB Future Sparks Festival, which takes place in the RDS, Dublin on 22 March.

popular
Gardaí unveil new Armed Support Unit vehicles to replace older models
Netflix has just added 33 very big movies to its library
One of the greatest crime movies of all time could be getting a sequel
The full list of cancelled flights in and out of Dublin Airport on Monday (so far)
Fish and chips could be removed from Irish menus over rising fuel costs
NOW announces large reduction to its monthly membership prices
Increase in passenger charges at Dublin Airport may be on the way
You may also like
4 days ago
The JOE Friday Pub Quiz: Week 301
5 days ago
QUIZ: Can you guess the pixelated album cover?
1 week ago
Lizzo pledges $1 million for Planned Parenthood and abortion funds
1 week ago
Dave Grohl performs for the first time since Taylor Hawkins' death
1 week ago
We've put together the ultimate playlist for Pride Weekend 2022
2 weeks ago
Acclaimed traditional Irish guitarist Dennis Cahill has died, aged 68
Next Page