One of the biggest names in British rock.

They are headliners at the Kerrang Tour 2015 which stopped off at The Academy in Dublin earlier this month.

Ahead of the gig, the guys called into us at The Workman's Club to perform an acoustic set, we hope you like it. 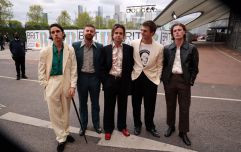 END_OF_DOCUMENT_TOKEN_TO_BE_REPLACED

In case you missed it, check out previous artists who have played live for The Sunday Sessions:

popular
The 50 most iconic songs of all time* have been revealed
Dublin cinema named best cinema in all of UK and Ireland
Only Murders in the Building is a must-watch for fans of true crime podcasts
PICS: The man with the biggest penis in the world has one unbelievable problem with it
Dublin pub hit with 'about 50 or 60' fake bookings on first day of indoor service
One of the best thrillers ever is among the movies on TV tonight
Tony Holohan says Ireland might be in a position "in the coming weeks" to move away from some restrictions
You may also like
1 week ago
Brits head to packed nightclubs at midnight on 'Freedom Day'
1 week ago
JOE’s Song Of The Day #905 – Zali ‘We Are Not Alright’
1 week ago
The JOE Music Quiz: Week 66
2 weeks ago
The JOE Music Quiz: Week 65
2 weeks ago
JOE’s Song Of The Day #904 – Rushes 'Funds'
3 weeks ago
The five biggest takeaways from the Kilmainham pilot music festival
Next Page