Three 6 Mafia member Gangsta Boo has died at the age of 43.

The cause of her death is still unknown at this time.

The hip hop star's passing appeared to be confirmed by her former labelmate DJ Paul, who posted a photo of her on Instagram seemingly as a tribute. 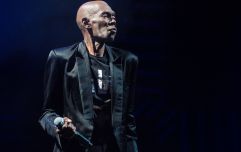 END_OF_DOCUMENT_TOKEN_TO_BE_REPLACED

Mitchell's career officially started in the '90s, when she linked up with Paul and other founding members of the rap group.

In addition to her own solo albums that she was making at the time, Mitchell featured on Three 6 Mafia's first five studio albums, including their debut record - 1995's Mystic Stylez.

Mitchell left Three 6 Mafia in the early 2000s, but continued with solo projects and featured with countless other rappers including Eminem, Gucci Mane, Lil Jon, OutKast, E-40, T.I., The Game and more.

She also collaborated with the hip-hop duo Run The Jewels.