Let the college's finest set of voices put a spring in your step.

Trinity College Dublin's beloved a cappella group, Trinitones may have another hit on their hands after they decided to grace Facebook with their charming rendition of George Ezra's hit, 'Budapest'.

The performance, which was streamed live on their social media page has already been viewed more than 29,000 times and it's easy to see why it's doing so well right now. 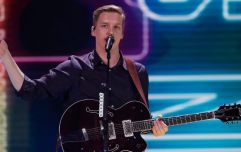 END_OF_DOCUMENT_TOKEN_TO_BE_REPLACED

Broadcast ahead of their performance at the 2018 Trinity Ball, which was headlined by Ezra himself, their charming take on his single already stands up next to their version of Wheatus' 'Teenage Dirtbag', which effectively brought them to a wider audience way back in 2013.

Founded in 2012, the group is now in its seventh incarnation and alongside appearing on Ireland's Got Talent, they have also toured in Australia, Hungary and the UK.

The Big Reviewski || JOE · Shane MacGowan snarls & stars in this new documentary from Julien Temple
popular
Harry Styles hits back at critics who told him to be more 'manly'
The JOE Friday Pub Quiz: Week 220
The 50 most iconic songs of all time* have been revealed
The JOE Movie Quiz: Week 80
What the hell is 'Stomp and Holler', and why does Spotify insist that you love it?
People think they've figured out the ranking of the viewers on your Instagram Stories
Here's Week 58 of JOE's 19 in 90 quickfire quiz
You may also like
1 year ago
The best festivals in Northern Ireland happening this year
2 years ago
Irish Official Charts reveal Ireland's Top 40 songs of the summer
6 years ago
Beat the post Electric Picnic blues with these 30 amazing upcoming gigs around Ireland
6 years ago
The Sunday Sessions: The brilliant George Ezra kicks off our brand new live music sessions
1 month ago
WATCH: Hozier tips popular busker playing ‘Take Me To Church’ on Grafton Street
1 month ago
The Wanted's Tom Parker reveals inoperable brain tumour diagnosis
Next Page