WATCH: Ed Sheeran sang the original Galway Girl last night and it went down a storm

Mixing the old with the new...

You may have heard a whisper about it? Or two? Or three? But Ed Sheeran was playing in the 3Arena in Dublin on Wednesday night in the first of two sold-out nights at the venue.

It doesn't need to be repeated that Ed Sheeran is a big deal in Ireland at the minute but... he's a big deal. 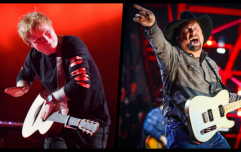 END_OF_DOCUMENT_TOKEN_TO_BE_REPLACED

His performance last night went down a treat with fans and with another show on Thursday, there's going to be a lot of happy music fans leaving the 3Arena.

He recorded his 'Galway Girl' music video in O'Connor's pub in Galway earlier this week and huge crowds showed up to see the singer as he went back to his old stomping ground to busk in the street.

In the 3Arena on Wednesday, he brought trad band Beoga out on stage and broke into a rendition of Mundy's Galway Girl mixed in with his own song of the same name.

Have a look below...

The Big Reviewski || JOE · The Big Reviewski with Dune, a mini-Hangover reunion & the best of Timothée Chalamet
popular
The JOE Friday Pub Quiz: Week 266
Here's the line-up for tonight's episode of The Graham Norton Show
HBO announces a new Sopranos series is in the works... kind of
Nightclubs are now ticket-only events, according to new measures
Alec Baldwin expresses "shock and sadness" over fatal film set shooting
‘If You Go, Go Slow’ - HSE launches new campaign urging people taking drugs to do it safely
Hunger strike ends as Nadim Hussain assured he won't be deported
You may also like
4 weeks ago
Kings of Leon announce first Irish shows in five years
1 month ago
It looks like Garth Brooks will play FIVE nights in Ireland after all
1 month ago
QUIZ: Can you get 10 out of 10 in the ultimate Ed Sheeran lyrics quiz?
1 month ago
Ed Sheeran announces extra show in Dublin's Croke Park as part of major 2022 tour
1 month ago
Fatboy Slim announces two major Irish shows for 2022
1 month ago
Ed Sheeran announces three Irish shows as part of major new tour
Next Page