A blackout across at least two countries.

Edesur, a major electricity provider in South America, has confirmed that the entire nations of Uruguay and Argentina have been left without electricity. The company is headquartered in the Argentinian capital of Buenos Aires.

The aggregate population of the two countries is over 48 million people. Certain parts of Brazil and Paraguay are also affected by the cut. 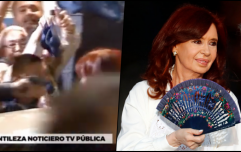 END_OF_DOCUMENT_TOKEN_TO_BE_REPLACED

"A massive failure in the electrical interconnection system left all of Argentina and Uruguay without power," electricity supplier company Edesur said in a tweet.

The fault has coincided with a local election vote in Argentina, where it is currently mid-morning. Argentina Standard Time is four hours behind Dublin.

So far, the cause of the power failure is not clear, nor is there any indication for when the power will return. The effects on various elements of Argentinian and Uruguayan infrastructure - such as healthcare - remain to be seen.

popular
Prince George reportedly told classmate "my father will be King so you better watch out"
Jeffrey Dahmer’s dad thinks he knows what’s to blame for son becoming a serial killer
Budget 2023: Cigarettes going up, energy credits announced, child and social welfare increases confirmed
Two new 24-hour bus services are coming to Dublin
An underseen disaster film is among the movies on TV tonight
QUIZ: Test your knowledge with this Ultimate Friends Character Quiz
CONFIRMED: Renters to benefit from €500 tax credit as part of Budget 2023
You may also like
1 year ago
Diego Maradona: A remarkable career in pictures
3 years ago
Return of the blimp: Trump balloon takes flight in Argentina for G20 summit
4 years ago
All of Twitter made the exact same joke following that France V Argentina result
4 years ago
Argentina advance from the World Cup group stages following late drama
1 week ago
Casting call issued for new TV series about trying to buy a home in Ireland
1 week ago
Gardaí launch new app to track everything that you own
Next Page