The cigarettes have an estimated retail value of €6.9 million.

9.2 million cigarettes were seized at Dublin Port in a raid on Friday morning, 22 October.

The contraband was discovered via routine profiling and with the assistance of a mobile x-ray scanner and a detector dog by the name of Kelly.

It is estimated that the seized cigarettes boast a retail value of €6.9 million, according to Revenue officials. 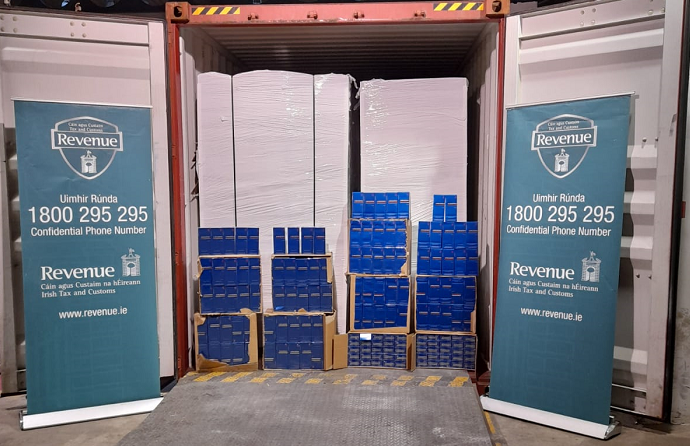 END_OF_DOCUMENT_TOKEN_TO_BE_REPLACED

The consignment of illegal cigarettes, branded 'Kingdom', originated in Bulgaria, and are said to have have cost the Exchequer a potential loss of €5.4 million.

Investigations are ongoing in relation to Revenue's operations targeting the supply and sale of illegal tobacco.

The public is encouraged to contact Revenue in confidence if they have any information regarding smuggling via their freephone number on 1800 295 295.

popular
One of the best movies of the decade has just been added to Netflix
20 years ago, one of the best sci-fi movies of the 21st century was a box-office bomb
Surprise frontrunner emerges as potential next James Bond as producers 'love him'
Katherine Ryan says famous TV star is a ‘predator’ and everyone in industry knows
One of the scariest films of all time is among the movies on TV tonight
Katherine Ryan shares harrowing truth about media coverage of ‘famous TV predator’
Very popular US fast food chain planning to open in Ireland
You may also like
11 hours ago
Boy seriously injured after alleged dog attack in Wexford
12 hours ago
Very popular US fast food chain planning to open in Ireland
1 day ago
Angle grinder used to steal safe from security van in Dublin
1 day ago
Staff threatened with screwdrivers during armed pharmacy robbery in Dublin
2 days ago
Three counties hit with weather warning for this weekend over "very strong" winds
3 days ago
"Enhanced x-ray technology" being trialled at Dublin Airport could lead to removal of 100ml liquid rule
Next Page