Reports in the last 24 hours have been circulating that The Sun in the UK has decided to stop including topless models on page 3 of their newspaper.

The paper itself hasn't commented just yet, but as always, lots of people on Twitter have been airing their views including a Fine Gael Councillor.

Dr Keith Redmond, who is a local councillor in the Howth-Malahide constituency, got this off his chest this morning. 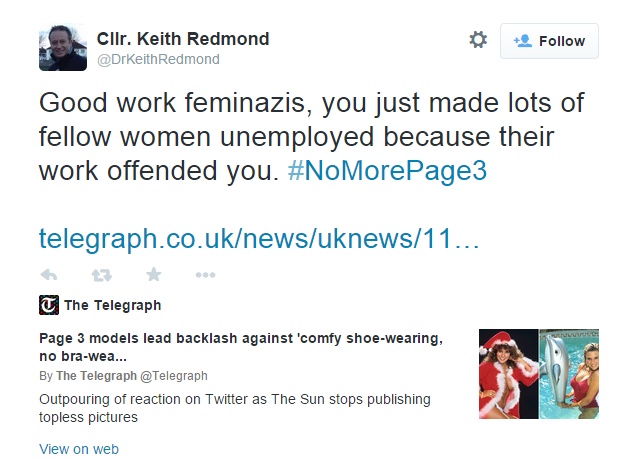 Feminazi definition: "The term is used pejoratively to describe feminists who are perceived as extreme."

A strong statement, it'll be interesting to hear what the top bra-ss at Fine Gael will make of all of this.

popular
Patient arrested after switching off roommate's ventilator because it annoyed her
Peter Kay moved to tears on stage while opening his first stand-up tour in 12 years
Dancing with the Stars has added a very surprising contestant
Winter warning issued as "severe" week of cold weather in store for Ireland
'America's Unknown Child' identified solving mystery after 65 years
U2 drummer Larry Mullen Jr. says band may perform without him in 2023
Ireland sees '100% success rating' with four-day work week trial
You may also like
2 years ago
Dara Calleary resigns as Minister for Agriculture after attending golf event
3 years ago
Full recount in Ireland South "could cost up to €1 million"
3 years ago
WATCH: 'I'd Vote 4u' is the latest election campaign song from politician Trevor Gilligan
3 years ago
Fine Gael on the rise, according to latest poll
3 years ago
Support for Sinn Féin drops five points, according to new poll
3 years ago
Sinn Féin gain massive support in latest poll, reaching the highest level in two years
Next Page