A spokesperson for former Taoiseach and Fianna Fáil leader Bertie Ahern has rubbished claims made in a WhatsApp audio message which was shared widely recently.

In the audio message, a woman is heard recounting a story she heard from a friend about someone who had met Ahern for dinner after initially matching on the Tinder dating app. 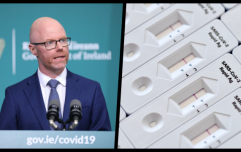 END_OF_DOCUMENT_TOKEN_TO_BE_REPLACED

The woman in the message said that Ahern told the woman he had been using the fake account of a different man - a much younger man - as he was a public figure.

But a spokesperson for Ahern told JOE on Friday morning that the recording is “complete rubbish” and it is "absolutely 100% not true."

“It's unfair that anyone would be subjected to this in any walk of life and something should be done to protect people from this sort of thing,” the spokesperson told JOE.