"Why isn't he called Murphy like the rest of them?" Boris Johnson on Varadkar

Shocking stuff from the favourite to be the UK's next Prime Minister.

A video went viral on Wednesday night of Boris Johnson giving a passionate speech about Brexit.

He talked about milk, chocolate bars, airplanes fuel, all the good stuff. It was absolutely bonkers.

And somehow, that still wasn't the most bizarre piece of news that broke about the favourite to become the UK's next Prime Minister in the past 24 hours.

A piece written in the Financial Times revealed a number of anecdotes about Johnson, some of which were about his attitude towards other foreign leaders.

One of which saw Johnson allegedly describe the French president Emmanuel Macron as a “jumped-up Napoleon”, and as for our own Taoiseach, Leo Varadkar, he asked “Why isn’t he called Murphy like all the rest of them?" 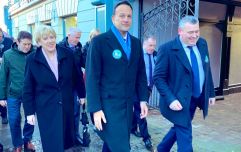 END_OF_DOCUMENT_TOKEN_TO_BE_REPLACED

The piece also implies that Johnson's plan is to bully Varadkar into agreeing with him on Brexit.

You can read the Financial Times article in full here.

Less than a week ago, Johnson was asked about the finer details of Brexit. During a discussion about a particular article, he was asked if he knew what 5C paragraph consisted of.