Gardaí have issued an appeal for witnesses to the incident, which took place on Friday evening.

An 11-year-old boy has died as a result of injuries sustained in a road traffic collision that took place in Donegal on Friday, 21 February.

It had initially been reported that the boy was in a serious condition after being struck by a van on the Slavery Road in Tullyarvan at approximately 5.30pm on Friday. 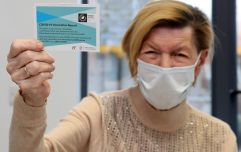 END_OF_DOCUMENT_TOKEN_TO_BE_REPLACED

The driver of the van, a man aged in his 50s, was uninjured in the incident.

Gardaí have now confirmed that the boy was officially pronounced dead at the Royal Victoria Hospital on Belfast on Sunday evening (23 February), having been transferred from Altnagelvin Area Hospital in Derry on Saturday morning.

Gardaí are appealing to anyone who may have information regarding the collision, particularly any road users with camera footage who were travelling on the Slavery Road between 5.15pm and 5.45pm on Friday, to contact Buncrana Garda Station on 074 932 0540.

Alternatively, people may contact the Garda Confidential Line on 1800 666 111 or any Garda Station.