Catherine Martin, who has been Deputy Leader of Ireland's Green Party for the last nine years, has been nominated to run against incumbent leader Eamon Ryan in the party's upcoming leadership contest.

In a statement issued on Wednesday evening, Dublin Rathdown TD Martin thanked the party members who had nominated her, and said she would give it "serious consideration over the coming number of days." 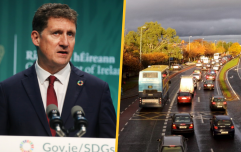 END_OF_DOCUMENT_TOKEN_TO_BE_REPLACED

Martin is currently leading the Green Party negotiation team with a view to forming a coalition government with Fine Gael and Fianna Fáil. Acknowledging this in today's statement, she said: "In the event of a leadership contest arising, I believe it is important that government formation talks fully conclude uninterrupted and that any leadership campaign happens subsequently."

She has said that she will continue to focus on those negotiations "while also listening to [our] membership about the future direction of [our] party and [my] role in it." Nominations for the leadership contest will remain open until 7 June.

Several elected party officials, including local councillors and Green Party groups (such as Rural Young Greens) have pledged to support Martin should she run against Ryan. Ryan has led the party since 2011.

popular
The Last Of Us Episode Five will premiere days earlier in Ireland and UK
5 years ago, Hollywood took a massive gamble on a huge sequel... and lost big time
Shock as blues singer beats Adele, Beyonce and Taylor Swift to win Song of the Year Grammy
QUIZ: Can you answer all of Judith Keppel's Who Wants to be a Millionaire questions?
One of the most underrated crime thrillers of recent years is among the movies on TV tonight
QUIZ: JOE's Big News Of The Day Quiz #41
Ben Affleck's bored expression at the Grammys becomes a meme
You may also like
4 months ago
Eamon Ryan says Sinn Féin approach to energy crisis is Tory Party-esque
5 months ago
Sinn Féin streets ahead in newest public opinion poll
5 months ago
Robert Troy issues new statement as Eamon Ryan calls for two investigations over controversy
5 months ago
Eamon Ryan's mother dies in tragic accident on family holiday
6 months ago
Ireland warned it is "not prepared for today’s climate and the climate of the future"
7 months ago
The long-awaited MetroLink is finally happening, for real this time, honest
Next Page