The affected area was evacuated.

The scene at Dublin Road, Drogheda has now been deemed safe.

The suspect device was recovered and made safe by Army EOD.

Both the car and device have been removed for a technical and forensic examination by investigating Gardaí.

The cordon and local traffic diversions have been lifted.

A Garda investigation into the matter is continuing.

A security cordon and traffic diversions are currently in place on the Dublin Road in Drogheda, County Louth at time of writing - Sunday 11 November at 4.45pm. 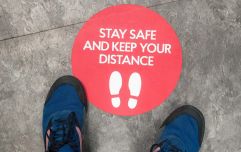 END_OF_DOCUMENT_TOKEN_TO_BE_REPLACED

The cordon and diversions are in place following the discovery of a suspicious device near a parked car.

The alarm was raised at 2.40pm on Sunday afternoon.

As a precautionary measure, Gardaí have evacuated the area and put the official cordon in place.

The Army Explosive Ordnance Disposal (EOD) team have been requested to attend the scene.


popular
QUIZ: Can you name the EU countries from this list in less than 45 seconds?
QUIZ: Name the counties where these Irish towns are located
Scientists discover potential “game changer” that “could help eliminate Covid-19”
Drama in Great British Bake Off opener as contestant knocks cake out of opponent's hands
QUIZ: Can you correctly identify these European country flags?
The 50 most iconic songs of all time* have been revealed
QUIZ: Can you name all 32 counties in Ireland in under 4 minutes?
You may also like
13 hours ago
Gardaí are renewing their appeal following a serious assault in Cork
15 hours ago
Cocaine now the second most common illicit drug in Ireland
15 hours ago
World sees record weekly number of Covid-19 cases
20 hours ago
Three people arrested at Dublin Airport after ingesting 280 pellets of cocaine
22 hours ago
Nearly half of Irish people believe the worst is ahead of us in relation to Covid-19 pandemic
1 day ago
188 new cases of Covid-19 confirmed, no new deaths
Next Page