"I owe the Afghan people an explanation for leaving Kabul abruptly on 15 August after Taliban unexpectedly entered the city."

The former President of Afghanistan Ashraf Ghani has apologised for fleeing Kabul, saying he believed "it was the only way" to "keep the guns silent" and "save Kabul".

He said that he fled the presidential palace at the urging of his security staff, adding that it was the "most difficult decision" of his life.

END_OF_DOCUMENT_TOKEN_TO_BE_REPLACED

"I owe the Afghan people an explanation for leaving Kabul abruptly on 15 August after Taliban unexpectedly entered the city," Ghani said in a statement on Wednesday.

"I have devoted 20 years of my life to helping the Afghan people work toward building a democratic, prosperous, and sovereign state - it was never my intent to abandon the people or that vision," he continued.

Ghani added that he had "deep and profound regret" that his Presidency ended in a "similar tragedy" to his predecessors.

"I apologise to the Afghan people that I could not make it end differently," he added.

"My commitment to the Afghan people has never wavered and will guide me for the rest of my life."

The former president, who has been criticised for his decision to leave the country, said that he would provide a "long assessment" and more details in the future.

Ghani added that the accusations that he had fled the country with "millions of dollars" was "baseless" and "completely and categorically false." 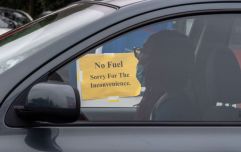 END_OF_DOCUMENT_TOKEN_TO_BE_REPLACED

He said that he and his family have been "scrupulous" with their personal finances and would welcome an official audit and investigation.

In an address on 18 August, Ghani said that his decision to leave the country was due to a "real chance" of him being captured and killed when the Taliban raided the presidential palace and searched for him.

He added that he was not even allowed to "put my shoes on" before leaving the palace.

The Taliban declared the war in Afghanistan was over last month and has since taken control of the presidential palace.

The Islamist group was able to seize control after all foreign troops pulled out with fears the Taliban could now reimpose the brutal regime they enforced prior to the war in 2001.

The Big Reviewski || JOE · The Big Reviewski with Ray Liotta, Goodfellas facts & Tom Hanks making us cry
popular
EU lorry drivers vow not to help UK get “out of the s**t they created themselves”
Netflix has just added arguably the very worst movie of the last decade
Four major employers join forces to create Ireland’s first remote working alliance
Up to 90% of petrol stations in the UK have run dry
Gardaí appealing for witnesses after body of man in his 20s found in Dublin's Grand Canal
Here’s what graduates from Irish colleges can expect to earn in the workplace
An Oscar-worthy Margot Robbie performance is among the movies on TV tonight
You may also like
1 day ago
Man (38) arrested on suspicion of murder of school teacher Sabina Nessa
2 days ago
BBC reporter Phil McCann responds after going viral
2 days ago
BBC reporter covering petrol shortage called Phil McCann
3 days ago
Leading Australian Covid-19 tracking website revealed to be run by three teenagers
3 days ago
38-year-old man arrested on suspicion of the murder of Sabina Nessa
3 days ago
There should be more bank holidays in Ireland to meet EU standards, argues TD
Next Page