A video of the incident was shared widely on social media.

Gardaí are yet to make any arrests in connection with an apparent assault on two bin men in Dublin at 10.10am on Friday morning (17 July). The incident occurred on Holywell Road, Donaghmede.

A video of the incident was shared widely on social media, and appeared to show a man drive onto the curb in his car, almost hitting one of the bin men. 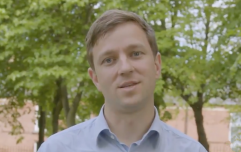 END_OF_DOCUMENT_TOKEN_TO_BE_REPLACED

The man proceeds to get out of his car and confront the man driving the bin lorry. After a tussle, the man returns to his car, retrieves something from the boot, and appears to strike the other bin man in the head with it. Gardaí have confirmed that the bin man who was struck with the object was brought to Beaumont Hospital, and his injuries are not believed to be life-threatening.

The man's employer has also confirmed that the employee is "okay."

Gardaí say that no arrests have been made and that the investigation is ongoing.

The video can be seen below:

This is awful. Absolutely horrendous. pic.twitter.com/Iq8IeGqcEl

The Big Reviewski || JOE · TBR Spotlight: Loki Episode One - 'Glorious Purpose'
popular
QUIZ: Can you name all of these counties from their nicknames?
The JOE Movie Quiz: Week 106
Matt LeBlanc has seen the memes of him as every Irish auld lad and very much enjoyed them
Cyclist in critical condition following hit and run collision in Dublin
The JOE Music Quiz: Week 61
Pharmacies to begin administering Covid-19 vaccines from today
QUIZ: Take on this tasty challenge of your General Knowledge skills
You may also like
5 days ago
Taoiseach Micheál Martin "very concerned" over scenes in Dublin City Centre
5 days ago
€64,000 stolen from nine customers of Irish bank following text message scam
6 days ago
Gardaí say licensed premises in Dublin weren't forced to close on Sunday night
1 week ago
14 arrested as Gardaí disperse crowds of youths "loitering" in Dublin City Centre
1 week ago
Aontú's Peadar Tóibín says unrest in Dublin was "manufactured" by Government
1 week ago
Gardaí Commissioner defends use of riot shields to disperse crowds in Dublin City Centre
Next Page