George Hook made some incendiary remarks regarding rape on his show on Friday.

As we reported here, Hook was discussing the story of an alleged rape of a woman involving an Olympic swimmer, when he said:

"When you look deeper into the story, you have to ask certain questions. Why does a girl who just meets a fella in a bar go back to a hotel room? She’s only just barely met him, she has no idea of his health conditions, she has no idea who he is, she has no idea of what dangers he might pose, but modern day social activity means that she goes back with him, then is SURPRISED when someone comes into the room and rapes her. [...] But is there no blame now to the person who puts themselves in danger?" 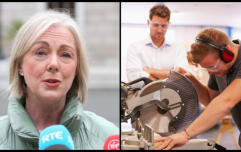 END_OF_DOCUMENT_TOKEN_TO_BE_REPLACED

The mentality of victim blaming sent listeners and internet into an angered frenzy, and today both the presenter and the radio station he works for reacted to the listeners' reaction.

Newstalk released a full apology on their website on Saturday afternoon, with Managing Editor, Patricia Monahan saying that the comments made were “totally wrong and inappropriate and should never have been made.”

Additionally, George Hook has apologised for his comments. He said: “I wish to apologise unreservedly for comments I made about rape on my radio programme on Newstalk yesterday. It was unacceptable to suggest in any way that blame could be attributed to victims of rape. I apologise for the comments which caused hurt and offence, and for this I am truly sorry.”

Meanwhile, the reaction online remains as strong as ever:

Today on @newstalk George Hook blamed a victim for being raped.

This is dangerous
This shouldn't be tolerated pic.twitter.com/3xZ4pDOO62

George Hook victim blaming a drunk girl who got raped multiple times. And blaming her parents.
She was not any way responsible George.
Scum.

If Newstalk don't fire George Hook it's because they endorse his views. Remember that the next time you tune in.

Anyone shocked by George Hook's comments hasn't been paying attention to the bile that preceded them. He's been on this path a long time.

George Hook's comments are dangerous, and a perfect encapsulation of rape culture. His comments enable rapists.

popular
The JOE Friday Pub Quiz: Week 307
Anne Heche dies one week after car crash, aged 53
Record for hottest August day in Ireland ever has now been broken
An exciting Irish crime thriller is among the movies on TV tonight
WATCH: Flight makes scary 'lowest ever landing' at Greek airport, narrowly avoiding plane spotters
A great underseen action thriller is among the movies on TV tonight
Shooting stars set to light up Ireland's skies this weekend
You may also like
4 months ago
Primary school homework should be abolished, says child psychotherapist
6 months ago
Vicky Phelan "deeply honoured" to be presented with the Freedom of Limerick
8 months ago
Three-month plan needed to manage current Covid wave, says NPHET official
9 months ago
Simon Harris "surprised" by lack of booster programme for healthcare workers
2 years ago
Ivan Yates to retire from television and radio broadcasting
3 years ago
Half of Irish people would not report the rape of someone else, according to survey
Next Page