"The photograph shows the most appalling bad taste on the part of Mr Elliott."

Gordon Elliot's training licence has been suspended for 12 months, and he has been fined €15,000.

Six months of Elliot's punishment have been suspended, while he has agreed not to attend race meetings in that period. 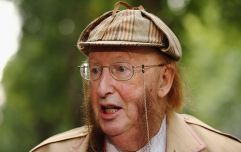 END_OF_DOCUMENT_TOKEN_TO_BE_REPLACED

This is in relation to an image that emerged during the week of him taking a phone call while sat on a dead horse.

Elliot's ban starts on 9 March, just over a week before Cheltenham begins.

The Irish Horseracing Regulatory Board said: "This photo caused considerable public dismay and anger given not only what was depicted but also the jovial demeanour and gesticulations of Mr Elliot.

"This committee is of the view that the photograph shows the most appalling bad taste on the part of Mr Elliot, insofar as it demonstrates a complete absence of respect for the horse at a time when he still remains in his charge. 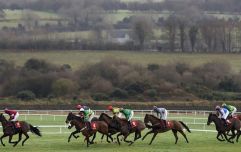 END_OF_DOCUMENT_TOKEN_TO_BE_REPLACED

"In the view of the Committee there is also a sinister aspect to this case. The committee are satisfied that the publication of this photograph is part of a concerted attack upon Mr Elliot, the full circumstances of which are unknown."

Elliot's response can be seen below:

popular
Netflix has just added 23 very big movies to its library
The JOE Friday Pub Quiz: Week 308
Controversial influencer Andrew Tate banned from Instagram and Facebook
Fine Gael announces special screenings of Michael Collins movie in 19 cinemas across Ireland
Pilots fly over destination airport at 37,000 feet because they were both sleeping
One of 2022’s best hidden-gem comedy series is available to stream
The prequel to one of the best twists of all time and 7 more movies & shows to watch this weekend
You may also like
6 months ago
COMPETITION: Here’s how you can WIN a day at the races for you and three friends
8 months ago
COMPETITION: Win a race day experience to remember for you and five friends
1 year ago
COMPETITION: Win tickets to the Dubai Duty Free Irish Derby and more amazing prizes
1 year ago
All roads lead to Cheltenham after a busy Christmas period of shocks
1 year ago
Breaking the 'mystery' around horse-racing ahead of Longines Irish Champions Weekend
2 years ago
Tonight's episode of Finné on TG4 tells the incredible story of jockey Paddy Merrigan
Next Page