One of the saddest stories in the last seven days was the death of Antrim man Alan Drennan, who passed away in Ibiza last Sunday.

The Newtownabbey man arrived on the holiday island with his ten friends the day before, and was found dead in his hotel room less than 24 hours later. There's an investigation underway to figure out the cause of his death.

END_OF_DOCUMENT_TOKEN_TO_BE_REPLACED

To add to the sadness of the story, Alan would have celebrated his 21st birthday on Wednesday and his friends on the island marked the occasion in a very emotional way.

A group of them gathered beside the sea at sunset and played Alan's favourite song Satellite - Oceanlab. They held a banner with a photo of him and a lyric from the song, and they released lanterns to remember their dear friend. 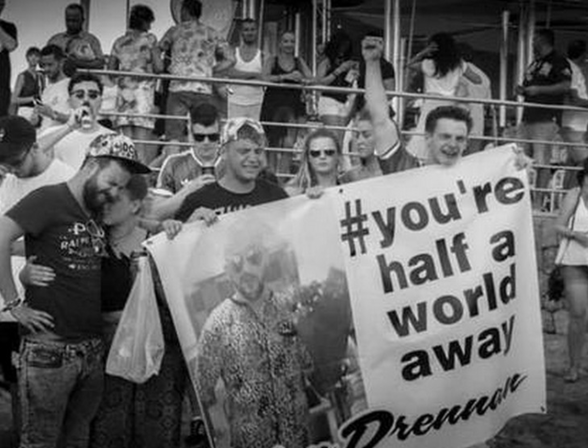 A beautiful gesture by his friends. RIP.

Photo via David Patterson and hat-tip to Today FM.

House of Rugby Ireland · Ireland's feel-good win, Casey's initiation song, scrapping Sexton and Scott Williams interview
popular
Varadkar felt "very bad" for missing Irish reopening dates
Eoghan McDermott to leave RTÉ after six years (Report)
QUIZ: Can you answer all the £1 million questions from Who Wants to be a Millionaire?
Impact of vaccination on healthcare workers "phenomenal"
Someone in Ireland is €500,000 richer following Tuesday's EuroMillions draw
BBC reveals Season 6 of Line of Duty is coming later this month
Sony are giving away a free game to all PS4 and PS5 owners
You may also like
44 minutes ago
Varadkar felt "very bad" for missing Irish reopening dates
1 hour ago
European Medicines Agency begins rolling review of Russian Sputnik V Covid-19 vaccine
4 hours ago
Three men arrested as part of investigation into organised crime in the midlands
5 hours ago
Ireland sees drop in attractive work destination rankings
18 hours ago
New survey shows 40% of people in Ireland bought from Amazon UK this year
18 hours ago
25 more people with Covid-19 have died in Ireland, 566 new cases
Next Page