Irish man arrested after 15 people discovered in lorry in UK

The truck is owned by a Cork company.

A man in his 50s from Ireland has been arrested following the discovery of 15 people in the rear of his lorry near Chippenham in the UK.

He was arrested on suspicion of assisting illegal entry into the country and remains in custody for further questioning.

The truck is owned by Cork company Delaney Transport, which is based in Glanmire.

All of those found inside are believed to be over the age of 16 and were given medical checks at the scene, with one taken to hospital for further assessment and the others being taken into custody.

All 15 men have been arrested on suspicion of entering the UK illegally.

In a statement issued to the Neil Prendeville Show on Cork's Red FM, Mike Delaney of Delaney Transport confirmed the truck was owned by their company and was travelling from Callais to Dover.

"The driver heard knocking and thought it was a flat tyre," according to Delaney Transport.

"The Delaney Transport driver then immediately called the Police who arrived to find 15 people in the back of the trailer. " 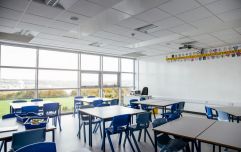 Education Minister: “Hard to see all students being back in September" with two metre rule in place

END_OF_DOCUMENT_TOKEN_TO_BE_REPLACED

The company said they and the driver of the truck have been cooperating with police and they will continue to do so.

"Members of the public would have noticed a large number of emergency services in the vicinity of the A350 last night while we dealt with this incident," Duty Superintendent of Wiltshire Police Steve Cox said.

"The road was closed for approximately four hours while we carried out enquiries at the scene and recovery was arranged for the lorry, which was a hard-sided large goods vehicle.

"We are working closely with partner agencies as we conduct further enquiries - I fully understand that recent tragic events elsewhere in the country will mean there will be increased interest and heightened concern regarding this incident.

"I'd like to thank all emergency services who responded last night - as with all incidents, we didn't know the scale of what we would potentially be dealing with and all first responders showed true professionalism at the scene.


popular
Mega-popular US hard seltzer White Claw to go on sale across Ireland
US National Guard deployed following clashes in Minneapolis over death of George Floyd
RTÉ launch new dating show called... Love in Isolation
Here's Week 34 of JOE's 19 in 90 quiz
QUIZ: How well do you know The Lord of The Rings movie saga?
Gardaí find €333,000 worth of drugs across eight properties in Mayo
The line-up for the season finale of The Late Late Show is here
You may also like
22 hours ago
More than three in five Irish employees are worried about the impact of Covid-19 on their jobs
1 day ago
17 more people have died from Covid-19 in Ireland, 73 new cases
1 day ago
Temperatures to hit 26 degrees in parts of Ireland tomorrow
2 days ago
Nine new Covid-19 deaths confirmed, 37 new cases
2 days ago
80 incidents of spitting and/or coughing at Gardaí confirmed since introduction of Covid-19 guidelines
2 days ago
Irish pubs and restaurants could see capacity reduced by 87% due to Covid-19
Next Page