Jasus, it sounds like he's actually going to do it.

Joe Brolly is a barrister, a GAA pundit, a former footballer and a columnist... But it looks like the Derry man might be considering adding a new, and particularly prestigious, job to his CV: President of Ireland.

The idea of Brolly 4 Prez has been thrown around a lot in the last few years — he's a well-known character with a sound knowledge of Irish law who's never short of an opinion, and has plenty of causes to champion. Speaking to Newstalk today, he appealed to those exact causes when asked once again if he'd consider trying to take the reins from Michael D in 2018. 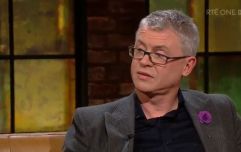 END_OF_DOCUMENT_TOKEN_TO_BE_REPLACED

Responding to Ivan Yates' question, Brolly said "I'm going to turn the Áras into a homeless hostel and live there with them... And maybe about four or five particular causes that I'm working on at the moment."

Sounding shocked, Yates followed-up: "You're going to stand for President?" at which point Brolly became more coy, saying "Well, I haven't said that... Somebody needs to do something."

Incumbent President Michael D. Higgins has not explicitly stated his intention to run for the office again, and he will be 77 years old by the time the 2018 election takes place.

popular
Here is a list of every Bank Holiday in Ireland in 2023
QUIZ: Guess the movie from the movie poster
Nicola Bulley's phone found by the river 'could be a decoy', diving expert suggests
Woman dies from hypothermia after telling doctor she 'couldn't afford heating'
5 years ago, Hollywood took a massive gamble on a huge sequel... and lost big time
One of the best crime thrillers ever is among the movies on TV tonight
The Last Of Us Episode Five will premiere days earlier in Ireland and UK
You may also like
2 months ago
'Soccer's Nelson Mandela' - Joe Brolly questions Roy Keane after World Cup comments
1 year ago
Joe Brolly "taken off air" during Claire Byrne Live debate on Monday night
3 years ago
Seven years of Twitter debate between Joe Brolly and Colm Parkinson coming to a head next week
3 years ago
Joe Brolly: "The DUP is about narrow self-interest"
3 years ago
'I was told Joanne Cantwell had lost confidence in my abilities as an analyst'
3 years ago
Here's how to get tickets to Ireland Unfiltered Live with Joe Brolly
Next Page