Scottish comedian Kevin Bridges has announced that he will perform a third date in Dublin's 3Arena later this year.

Bridges made the announcement that he was adding the 4 November show after tickets for his 2 and 3 November dates sold out.

Story Dublin! My two shows @3arenadublin are now sold out but a final 3rd date has been added. On sale this Wednesday! #gaslike #deadly #horse Yaldy! 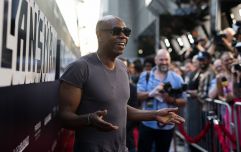 END_OF_DOCUMENT_TOKEN_TO_BE_REPLACED

Bridges is heading to Belfast's SSE Arena on 9 and 10 November as part of The Brand New Tour in 2018.

Tickets cost between €33.50 and €50.00, including booking fee, and go on sale to the general public on Wednesday, 24 January at 9am via Ticketmaster.

popular
Two new 24-hour bus services are coming to Dublin
Jeffrey Dahmer’s dad thinks he knows what’s to blame for son becoming a serial killer
QUIZ: Test your knowledge with this Ultimate Friends Character Quiz
Power-ranking the House of the Dragon characters after THAT big fire
House Of The Dragon is already better than Game Of Thrones
€600 energy credits and free schoolbooks for children set to be announced in Budget 2023
An underseen disaster film is among the movies on TV tonight
You may also like
3 days ago
2022's sexiest show is finally available to watch in Ireland
1 month ago
WATCH: The full trailer for Cobra Kai season 5 has landed
2 months ago
Comedian Rhod Gilbert reveals he is undergoing cancer treatment
2 months ago
Celebrity Juice axed by ITV after 14 years as Keith Lemon pays tribute to "the longest most fun party"
3 months ago
One of the best sitcoms of recent years is finally available to watch in Ireland
4 months ago
REVIEW: Magic Goes Wrong is incredibly dumb, but in the best possible way
Next Page