Taoiseach Leo Varadkar walked away while being quizzed by a member of the public on Wednesday.

While canvassing in Cavan, Varadkar was challenged by a Lizzy Quinn, a young woman who said: "I think you need to look after all the citizens, not just the people who 'get up early in the morning', whatever that means. I think your party, your legacy, your government has ultimately failed to do that."

At that point, Varadkar said "I wouldn't agree with that assessment at all" and walked away from the gathering as the woman was still speaking. A staffer also intervened, stepping between the woman and the Taoiseach.

A video of the exchange currently has 120k views on Twitter, after being recorded and shared by Irish Independent journalist Hugh O'Connell.

Speaking to JOE On Thursday, Quinn, a 22-year old-graduate of History and Geography, explained the interaction from her perspective.

Quinn said: "I was there yesterday to support my mam and her colleagues who are childcare workers and wanted to talk to the Taoiseach about the mounting struggles facing workers in that area such as low capitation that hasn't increased on 10 years and feelings of being undervalued despite their important work, which I feel almost every worker in Irish society can relate to no matter what line of work they're in."

A civilised exchange with childcare workers was followed by this pic.twitter.com/UoQFOTjcQ4

She further clarified that she had been living in Dublin, but had since moved back to Meath "due to the lack of affordable and adequate housing in Dublin." 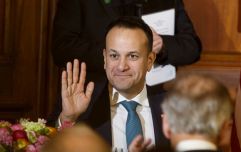 Leo Varadkar will reportedly call a general election for 7 February

END_OF_DOCUMENT_TOKEN_TO_BE_REPLACED

Asked how she felt about the Taoiseach's reaction to her questions, Quinn said: "I felt completely dismissed when it was clear he wasn't willing to engage in conversation with me and extremely disappointed that he was so reluctant to listen to my valid concerns and criticism of his party's harmful policies and warped priorities.

"I also felt slightly embarrassed by his actions as the encounter took place in a large crowd with a big media presence but the overall feelings of disappointment and frustration soon masked any embarrassment I felt.

"There were a number of other issues I wanted to raise with the Taoiseach before he turned and walked away, the main ones being the lack of affordable and adequate accommodation in this country and the current homelessness crisis."

This week alone, a homeless man has been left with life-changing injuries after he was mistakenly interfered with by an industrial vehicle. Earlier today, it was confirmed that a homeless woman had died while in emergency accommodation in Dublin.

Asked about the viral nature of the video, Quinn explained: "People have been incredibly supportive which I feel is reflective of how fed up and disappointed people are with the current government.

"I just hope the video emboldens other people to make their voices heard and hold politicians accountable for their actions."

Representatives for Leo Varadkar have been contacted for comment.