Leo Varadkar explains his reasons for wearing the shamrock poppy

"This weekend is the centenary of the armistice so it's something I wore last year and I'm wearing this year as well."

Leo Varadkar was this week's guest on Ireland Unfiltered.

During a wide-ranging conversation with host Dion Fanning he spoke about his vision for a "United Ireland worth having", why Europeans in Brexit Britain no longer feel at home and he offered a stout defence of his government’s housing policy during the housing and homelessness emergency.

END_OF_DOCUMENT_TOKEN_TO_BE_REPLACED

But the subject of the poppy, which has been in the news with the refusal of Irish football international James McClean and Serbian Premier League midfielder, Nemanja Matic to wear it on their team jerseys, came up early on in the conversation.

Dion: Taoiseach, welcome to Ireland Unfiltered. Before we really get into it, I’m struck by the emblem on your suit there, can you tell me a little bit about it?

Leo: This here, it's the shamrock poppy, so it's made by the British Legion in Ireland and it's sort of a modified version of the poppy. The poppy, as you know, applies to anyone who died fighting for Britain in any war including recent wars like Iraq for example, which we would have had no part in. But this is a specific one that they've done to allow us to remember Irish people who died fighting for the United Kingdom, which of course, we were part of in the first World War. This weekend is the centenary of the armistice so it's something I wore last year and I'm wearing this year as well.

Dion: Is that important to wear it this year when you've 35,000 Irish people died in that war? 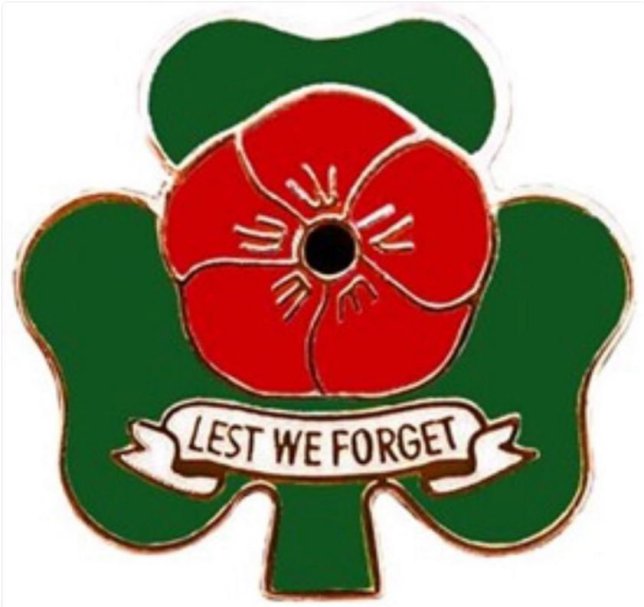 Leo: I think it's particularly important this year because of the centenary, but I think it's important every year. A few times in the course of Irish history we've reinvented our history, and I think now that we've a decent distance from that period, we can perhaps be a little bit more honest about it. I think by understanding Irish history, we help to breed understanding but it's not designed to challenge anyone's loyalty.

END_OF_DOCUMENT_TOKEN_TO_BE_REPLACED

If you think about it, if you go back to the first World War, a lot of the Irish people who fought in that war fought on the same side. They would have been Protestants and Unionists from Northern Ireland, there also would have been a lot of Catholics from the southern part of Ireland who at that time believed in Home Rule, but Home Rule would have meant staying in the British Empire. It's useful for us to acknowledge the complexity of our history that for a long period of time, Ireland was very much a part of the empire, was very much part of the imperial enterprise, occupying places like India for example. Irish people from my mum's side occupied my dad's country as British people even though they're from Ireland. I think it's always useful for us to experience our shared history in a way that helps us to understand it better. But as I said before, not in a way that attempts to question anyone's loyalties.

Dion: Are you concerned about that at the moment because of Brexit and things like that shared history that there  is a rupture between Ireland and Britain?

Leo: Yeah, very much so. I think anything that pulls Britain and Ireland apart and anything that pulls the two communities in Northern Ireland apart is moving backwards. So much has been done in the last 20 or 30 years to improve relations between Britain and Ireland and relations between the two communities in particular in Northern Ireland. But I think moments like the armistice on 11 November allows us to remember that we shed blood together.

Dion: But can that transcend what's happening at the moment because it does seem to be getting more and more fraught. I'm interested in your point of view; I imagine one of the most difficult and confusing aspects of your job at the moment is knowing what Britain thinks about Brexit on any given day because today, Monday, it's one thing. Maybe tomorrow it's going to be something else, how do you keep on top of something like that which is so critical to Ireland's interests?

Leo: I suppose I'm very conscious that in Britain and the United Kingdom, there are still very different views on Brexit but my job obviously as Taoiseach is to interact with the Prime Minister and the Prime Minister, Theresa May, speaks on behalf of the UK government. I actually spoke to her today on the phone and told her I was wearing this (the shamrock Poppy), and I thought it was apt in many ways, it was coincidental but apt, because what I'm trying to do and what we're both trying to do is marry the two traditions; the shamrock which is Ireland, the poppy which in many ways is British and come to some sort of understanding, or some sort of agreement that can work for both countries.

END_OF_DOCUMENT_TOKEN_TO_BE_REPLACED

The Big Reviewski || JOE · TBR Spotlight: The Falcon and the Winter Soldier Episode Four - 'The Whole World is Watching'
popular
The 50 most iconic songs of all time* have been revealed
The JOE Movie Quiz: Week 97
PICS: The man with the biggest penis in the world has one unbelievable problem with it
People think they've figured out the ranking of the viewers on your Instagram Stories
Making A Murderer: The explosive and NSFW telephone call that implicates a new killer
WATCH: This episode of Tellytubbies was so creepy it was banned from TV
Thunder Force review: somebody needs to stop letting Melissa McCarthy's husband make movies
You may also like
2 days ago
Stephen Donnelly says his family should "never" be involved in attacks aimed at him
2 days ago
Irish mobile network GoMo launches new €14.99 per month "for life" offer
3 days ago
First Irish blood clot case after AstraZeneca vaccine being investigated
3 days ago
Seven more people with Covid-19 have died in Ireland, 400 new cases
3 days ago
Slane Castle set to host a "double summer concert" next year
3 days ago
Over 55% of Covid-19 cases under source investigation may be linked to shopping
Next Page