The list of the 27 countries Irish government ministers will be visiting on St. Patrick’s Day

Says here Enda Kenny WILL be going to Washington on March 17.

His future is the subject of plenty of debate at the moment, but Taoiseach Enda Kenny will be visiting Donald Trump in the White House on St. Patrick’s Day, according to the “Promote Ireland” programme of international events announced by Minister for Foreign Affairs and Trade, Charlie Flanagan TD, on Tuesday.

The Taoiseach, Tánaiste and 27 government ministers will take part in over 100 business events and high-level political meetings in over 50 cities in 27 countries across Europe, the Americas, Asia, the Pacific, and the Middle East for what is described as “a truly global celebration of Ireland”. 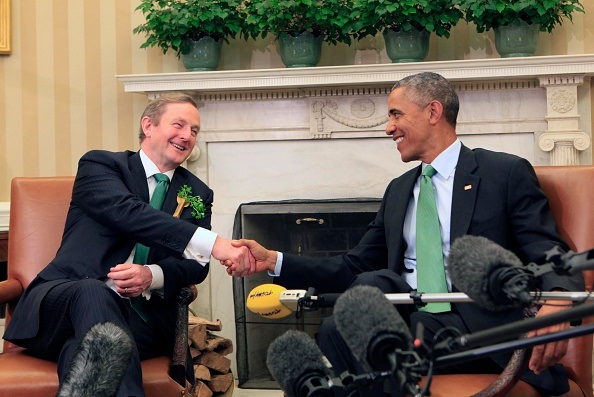 END_OF_DOCUMENT_TOKEN_TO_BE_REPLACED

“The St. Patrick’s Day period is a time to renew the important links between Ireland and the global Irish abroad.  From Asia to the Americas, we come together each St Patrick’s Day to share in the pride and memory of our common heritage and affinity,” said Charlie Flanagan.

“This year will see the Taoiseach, Tánaiste and 27 Ministers and Ministers of State undertake intensive programmes involving over 50 cities in 27 countries across Europe, the Americas, Asia, the Pacific, and the Middle East for a truly global celebration of Ireland. The greening of landmarks is proving ever more popular as each site acts like a beacon, celebrating our National Day.”

You can see the countries and cities that will be visited by the respective government ministers below; for more details, check out the Department of Foreign Affairs website here.

List of cities to be visited by Irish government ministers on St. Patrick's Day

END_OF_DOCUMENT_TOKEN_TO_BE_REPLACED

House of Rugby Ireland · Quinn Roux on finding a home in Ireland and Mike McCarthy brings the absolute HEAT!
popular
The JOE Movie Quiz: Week 85
QUIZ: Name all the countries of the EU that contain 2 vowels or less
QUIZ: Can you name the Marvel Cinematic Universe film from just a single screen shot?
Recall of Pedigree dog food over safety concerns
The 50 most iconic songs of all time* have been revealed
QUIZ: Can you correctly identify these European country flags?
PIC: This is where Irish men rank in the world map of erect penis size (NSFW)
You may also like
2 days ago
Pfizer to temporarily reduce vaccine deliveries to Europe
2 days ago
Covid-19 hospital cases continue to rise despite some "hopeful trends"
2 days ago
Church and State "bear heavy responsibility" over Mother and Baby Homes, says President
2 days ago
Josepha Madigan apologises for "insensitive" comment about "normal children"
3 days ago
28 more people with Covid-19 have died, 3,955 new cases
3 days ago
Gardaí fine three people for driving 80km to get a takeaway during Covid restrictions
Next Page