The political world is still reeling from Trump's decision to pull America out of the climate change solving (or not, depending on your stance on the matter) Paris Agreement.

This was the topic of conversation during an episode of BBC Talkback this week, when UKIP's former Northern Ireland leader David McNarry was one of the guests on the show. 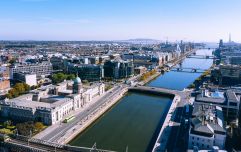 END_OF_DOCUMENT_TOKEN_TO_BE_REPLACED

Also on the programme was Alliance Councillor Emmet McDonough-Brown, who stated that climate change may put Dublin underwater by the year 2100.

McNarry's response? "Well it wouldn't be a bad thing."

McDonough-Brown responded that it was an appalling thing to say, and soon after listeners to the show flooded the lines with complaints about McNarry's remarks.

The show's host William Crawley asked if McNarry stood by his statement, to which he answered: "[If] people can't abide flippancy, I'm sorry for them."

"I was putting it into the context of, Dublin has been no friend of Northern Ireland, politically, economically or any otherwise and it was a case of saying, 'if it's going to go underwater, well fine'. I really don't mean that and I hope people wouldn't think that."

You can listen to the interview in full here (the conversation in question kicks off around the 1 hour 5 minute mark).

popular
QUIZ: How many of these characters from The Simpsons can you name?
Australian woman stuck with Irish accent after tonsil surgery
Two children, aged 3 and 4, hospitalised after consuming suspected cannabis jellies
The 50 most iconic songs of all time* have been revealed
PICS: The man with the biggest penis in the world has one unbelievable problem with it
People think they've figured out the ranking of the viewers on your Instagram Stories
Assassin's Creed director on why Ireland is the perfect setting for their new game
You may also like
1 week ago
Cyclist killed after collision with a bus in Dublin
2 weeks ago
New Dublin restaurant promises the "carbiest comfort food in the city"
2 weeks ago
Aviation company Shannon Technical Services to create 80 new jobs and open Dublin office
3 weeks ago
National Lottery confirms Wednesday’s €12.7 million jackpot was won in Kilkenny
3 weeks ago
Man killed following road traffic collision in Dublin
4 weeks ago
Dublin cyclist says he "could've died" after being pushed into ditch
Next Page