Major Scientology office to open in Ireland this October

There's been a lot of fuss in the past month over whether or not Louis Theroux's latest documentary, entitled My Scientology Movie, will get an Ireland release.

While it's unlikely that blasphemy laws will prevent the movie making it to Irish cinemas, Altitude Film Distribution have made it clear that there are no plans to show the documentary in Ireland.

However, the city of Dublin could soon be getting a much closer, real-life look at the controversial organisation - which has plans to open up a National Affairs office in Merrion Square next month. 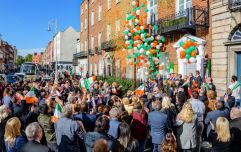 END_OF_DOCUMENT_TOKEN_TO_BE_REPLACED

Scientology's Executive Director for Dublin Ger Collins posted on Facebook, saying "There will be 5 Sea Org members posted and living in the office, and 5 full time but non SO OSA Office of Special Affairs staff."

"It will also be a PR base to host VIPs and government officials. The building itself has huge potential, and when it will be fully renovated it will be amazing, and something we will all be very very proud of!"

Sea Org refers to a branch of Scientology which comprises the organisations most dedicated members.

Dublin is already home to a Dianetics and Scientology Centre, which is on Abbey Street Middle.

popular
One of the best Irish movies ever made has just been added to Netflix
The movie described as "Showgirls in a convent" has a tentative Irish release date
One of Keanu Reeves' best movies has just been added to Netflix
A who's who of Irish music pay tribute to the late Mic Christopher in new documentary on his life
QUIZ: Can you get 20/20 in this desperately tricky capital cities quiz?
A woman has died and several injured after fatal Kilkenny crash
Here's the line-up for this week's episode of The Late Late Show
You may also like
8 months ago
Louis Theroux meets Carole Baskin in new Tiger King documentary
8 months ago
Louis Theroux announces new Tiger King documentary
1 year ago
Louis Theroux's new four-part documentary series starts on Sunday
1 year ago
New retrospective Louis Theroux documentary series coming to BBC
1 year ago
Chris O'Dowd discusses infamous celebrity 'Imagine' video from beginning of lockdown
1 year ago
Louis Theroux is to launch his own podcast next week
Next Page