At present, two status yellow warnings are in place.

Granted, adverse weather conditions are not something to be taken lightly, but because we're massive fans of Always Sunny, whenever we hear the name Storm Dennis, we can't help but think of 'The Golden God' of Paddy's Pub. 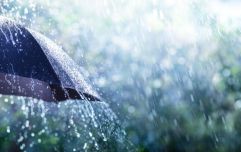 END_OF_DOCUMENT_TOKEN_TO_BE_REPLACED

Anyway, during an episode of the beloved comedy, the gang once took solace from 'The Storm of the Century' by hiding out in the bar and while that's certainly an option for most Irish people this weekend, we don't think the conditions are going to get that extreme!

However, there are two status yellow warnings in place for the country.

A status yellow wind warning is in place from 3am on Saturday 15 February until  8pm on the same day.

The weather warning states that conditions are expected to be: "very squally with southerly winds with mean speeds 50 to 65 km/hr gusts to around 100 km/hr, strongest on exposed coasts and hills. Winds moderating from the northwest later."

Aside from this weather warning, a status yellow rainfall warning for Ireland is also in place which states: "spells of heavy, locally thundery rain, on Saturday will lead to some flooding."

This particular warning is in place from 6am on Saturday 15 February until 9pm on the same day.

In terms of the overall conditions, Storm Dennis is set to bring very wet and windy weather on Saturday with some severe and damaging gusts expected. 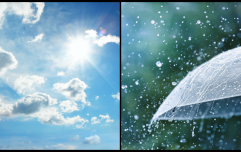 END_OF_DOCUMENT_TOKEN_TO_BE_REPLACED

Outbreaks of heavy rain are set to extend nationwide during the morning, accompanied by gale force southerly winds. The rain will be squally at times with a risk of thunderstorms. Localised flooding is expected with some coastal flooding along the Atlantic seaboard too.

As for Saturday evening, spells of heavy rain are expected with some thundery downpours likely and more flooding. Winds will ease for a time inland, but gales will continue in coastal counties.

Looking ahead to Sunday and the impact of Storm Dennis will continue to be felt.

Tomorrow is expected to be wet and windy with stormy conditions in Atlantic coastal counties, especially in northwestern counties.

Widespread heavy showers, especially in the north and west, are set to arrive too with a risk of hail and thunder. Some of the showers may turn wintry on higher ground.

Sunday night will see even more showers overnight, although they will become confined to western and northern coasts for a time.

All in all, wet and windy.

2/2 Localised flooding is expected with some coastal overtopping along the Atlantic seaboard. Highest temperatures of 9 to 12 degrees. pic.twitter.com/Ikqty7BY0D

The Big Reviewski || JOE · The Big Reviewski with Ray Liotta, Goodfellas facts & Tom Hanks making us cry
popular
Netflix has just added arguably the very worst movie of the last decade
EU lorry drivers vow not to help UK get “out of the s**t they created themselves”
The 50 most iconic songs of all time* have been revealed
Four major employers join forces to create Ireland’s first remote working alliance
PICS: The man with the biggest penis in the world has one unbelievable problem with it
Energy supplies in Ireland entering "very tight situation", says Eamon Ryan
Here’s what graduates from Irish colleges can expect to earn in the workplace
You may also like
2 weeks ago
More sunshine on the cards next week until "Atlantic system" brings heavy showers
2 weeks ago
Thunderstorm and rain warnings issued for all of Ireland as Indian summer comes to abrupt halt
2 weeks ago
This summer was Europe's warmest on record, EU scientists say
2 weeks ago
Temperatures to soar to 27 degrees today before thunderstorms and flooding to hit on Thursday
3 weeks ago
Temperatures in Ireland to hit highs of up to 27 degrees this week
3 weeks ago
The weather has a real 'first weekend of September' vibe to it the next few days
Next Page