Someone has finally painted a Teresa Mannion mural in Salthill

Just when you thought the phenomenon had ended, somebody got out their paint brush.

Since first going viral back in December 2015 for her report on Storm Desmond, RTÉ News' West Ireland correspondent Teresa Mannion has become a beloved icon of bad weather, receiving tributes from everyone, including Snoop Dogg, 50 Cent and Ariana Grande to name just a few. 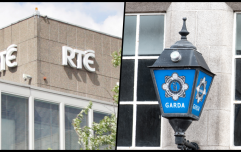 END_OF_DOCUMENT_TOKEN_TO_BE_REPLACED

There have been Christmas cards, football flags and remixes blared in Cork Opera House. She became the meme that kept giving, and for that, we'll always be grateful.

Oddly enough, the one tribute that seemed to be forgotten during this perpetual Teresa-mania was a mural.

Spotted by Mannion herself and shared to her Twitter followers, the mural appeared on an electric box in Salthill, County Galway, depicting her during the storm complete with the iconic line: "Don't make unnecessary journeys. Don't take risks on treacherous roads!"